Jason Brown posted this on Instagram the other day, and I enjoyed it, so I thought I'd jot it out for all of you.  Jason is based in New York, but when we're not all quarantined he makes his way to London fairly often.  He's quite active on Instagram with short snippets of exercises, tips, lessons, etc.  It's worth a follow.  Anyway, the idea is to keep your hands alternating with accents on each beat, but after every two bars of 5/4 change gears.  The odd numbered tuplets will work themselves out naturally, but the even numbered ones need a double stroke on each beat to turn around.  So, the sextuplets are double paradiddles, the 16th notes paradiddles, and the 8th notes double strokes.  In the video Jason goes from septuplets down to quarter notes and stops, but I like to go down and then back up without stopping. 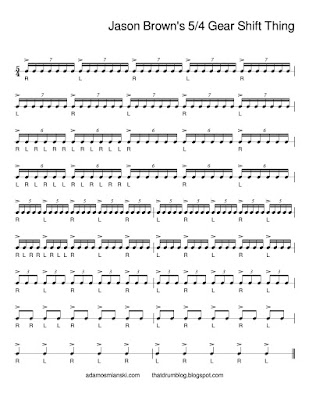 Posted by Adam Osmianski at 4:48 PM No comments: 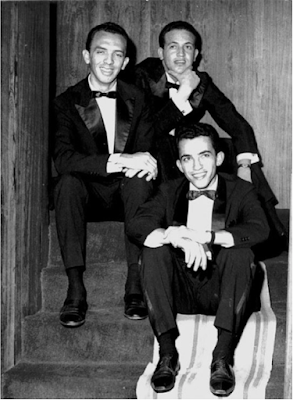 Transcription - Marcelo Costa, tamborim on "A Vizinha do Lado"

Continuing on with our look at telecoteco and other Brasilian comping rhythms here is a tamborim transcription from "A Vizinha do Lado" on Roberta Sá's record Braseiro.

Just as with jazz or any other style of music, one of the best ways to learn how to execute these rhythms in a stylistically appropriate fashion is to go straight to the source and listen and transcribe.  In this case we hear percussionist Marcelo Costa on tamborim starting about halfway through the tune.  This one will require some serious listening as there is a lot of shape and articulation that is not notated.  I intentionally did not write any articulation A) so as to make it clearer to read, and B) so anyone following along and/or trying to play this wouldn't get bogged down by notation, but rather, would simply listen.  That said, there are a couple of things worth drawing your attention to.

What I've notated in the transcription are just the notes played by the stick on the head of the tamborim.  Quite often, with the hand holding the drum, the underside of the head is tapped with the a finger in between the notes played with the stick.  So, a stock telecoteco pattern would look like this:

Almost 100% of the time when you find two 16th notes side by side, the first is a pick-up note played far more quietly than the second note, which is then accented.

Note that Marcelo is improvising here, but he is always on the correct side of the rhythm.  If you play any stock telecoteco pattern (see the "up" side of the sheet linked here) through the whole tune you will notice that it never crosses the melody or anything that Marcelo is playing.  This is extremely important when improvising in this style, and we'll chat more about how to do this next time.

Finally, remember that these rhythms are completely transferrable.  You don't have to be a tamborim player and/or percussionist for this transcription to be useful to you.  Try orchestrating it a number of different ways while playing along to the recording.  Here are a few ideas to get you started: 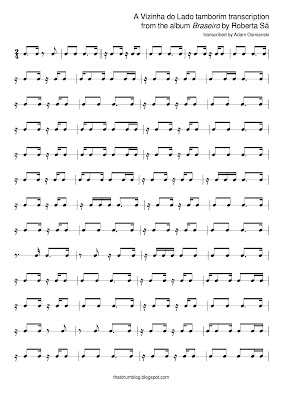 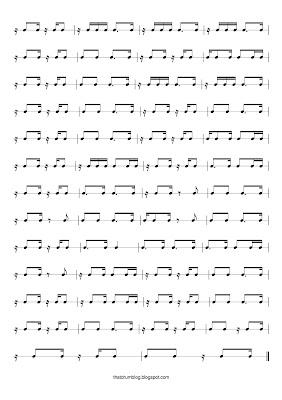 Posted by Adam Osmianski at 3:52 PM No comments:

How to practice flam rudiments

Just about every high school drumline has an exercise that looks something like this.

But I think it's often unclear to students, and poorly explained by instructors, as to what the purpose of this exercise is.  So I thought it would be good to pull this apart a little bit as, when done properly, it can be a very beneficial exercise, and can apply to any flam rudiment.

The basic gist of the exercise above is that the first two bars are what your hands are playing individually when playing flam accents.  But what has always bugged me is that the right and left hands are notated the same.  A better representation would be to play what the right hand actually plays, then what the left hand actually plays before putting it together.  From there you could play the whole exercise off the left if you wished.  Here's what that would look like.

To separate the hands and see what each one is doing is all well and good, but we can get more out of this.  In a flam passage such as this it can be easy to get lazy with the notes in-between the accents and/or flams.  These notes are often referred to as the "inner-beats". Which leads us to another drumline buzz-phrase: "watch the inner beats".  I heard/hear this time and time again, but again, it is rarely explained.  To "watch the inner beats" is to NOT be lazy with the notes in-between the accents and/or flams.  And better yet, we can break them down and practice them in a focused manner.  Let's try it with Flam Paradiddles this time.

Below are flam paradiddles followed by the rhythm played by each hand.

This time around, rather than just playing those rhythms as written, let's "clean up the inner beats" by breaking down the mechanics of each hand before putting them together.  To do this we'll look at the Strokings™ ala Accents and Rebounds.

On the right hand we begin with a downstroke so that our hand remains low for the next three tap strokes, which are followed by an upstroke in preparation for the next downstroke.

The left hand plays the same thing, but as it is displaced by a beat we begin with a tap stroke, followed by an upstroke again in preparation for the accent, which will be a downstroke so we're ready to play the next three tap strokes.

This may all seem a bit pedantic, but if you find that your flam passages are a bit "mushy", this will certainly clean them up, and by breaking down the mechanics of our motion we can build speed and efficiency.

Remember that this can be applied to any flam rudiment.  Note what each hand plays alone, figure out the strokings, and play them slowly before putting them back together.
Posted by Adam Osmianski at 11:37 AM No comments:

Drum 'n' Bass, as far as I can remember, never got really big in the States.  In high school, I remember some kids listening to techno and going to raves.  Some of these kids were my friends, and I also recall being ridiculed when I told them the only electronic music I could really get into was drum 'n' bass. More than 20 years later, I now teach a class in the history of EDM for West Virginia University, so a couple years ago I spent an entire summer reading about and listening to just about every style of EDM there is.  And while I can appreciate a lot of it more now, I'd still have to say that drum 'n' bass is some of the hippest and most listenable of those styles.  It certainly has the coolest drumming.

One of the most recognizable names in drum 'n' bass is Roni Size.  His album New Forms is a seminal work of the d'n'b canon.  In 1997 it won the Mercury Prize here in the UK, beating out Radiohead's OK Computer.  Below is the title track to the album.  In some ways it's very easy.  It's similar to that rock groove that every non-drummer can somehow kind of play.  But on the other hand, it's very fast, very intricate, and requires a lot of control.

I've written out the main groove that repeats throughout the song, but the devil is in the detail.  If you listen closely to the whole thing, you notice that each time around there are a few notes added here and there, giving it just a little bit more lift and energy each time.  In a weird way it reminds me of how some of the best jazz drummers build the density of their playing so gradually you almost don't notice it happening.  Anyway, here it is.  Drop me a line if you'd like a PDF. 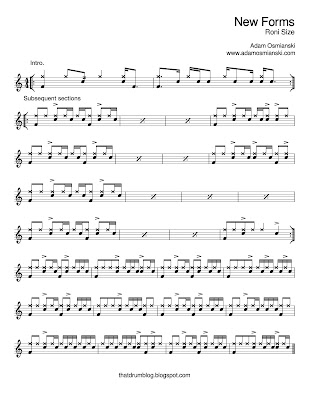 Posted by Adam Osmianski at 8:35 PM No comments: