You Be the Drummer - Stan Getz and The Oscar Peterson Trio

It's been awhile since I've posted one of these drummer-less recordings, so what better way to come back than playing with Ray Brown?!  There's not even really anything to say about this one.  Break out Syncopation, or The Art of Bop Drumming, or, hell, just play some time!

Posted by Adam Osmianski at 2:50 PM No comments:

Email ThisBlogThis!Share to TwitterShare to FacebookShare to Pinterest
Labels: Jazz, You Be the Drummer

For some reason this one has been in the drafts folder for ages, so I'm excited to finally get it out.  I came across this video a few years ago of Tain playing with an unnamed band at the San Jose Jazz Fest in 2014.  I was initially taken by the way he used the cowbell, and by the way he put the last note of the tumbao on the tom or floor tom instead of the bass drum, so I decided to dig into it.


It's funny when we first see/hear certain things, especially at brighter tempos, it seems like there is so much going on, but when you look a little deeper at this video you'll notice that Tain isn't actually playing that many different things rhythmically.  It's often the same, or very similar, stickings orchestrated differently around the drums (sort of like in the Eric Harland transcription we looked at way back when).

And, speaking of what he's playing, it's basically a 3-2 Songo.  This may not immediately jump out at you as a Songo, because Songo is so often played in 2-3.  So much so that 2-3 Songo is often simply taught as the single way to play Songo.  A quick Google search turns up a plethora of images that look like this:

Now, I'm not suggesting that there is anything wrong with this.  This is a perfectly acceptable way to play a Songo.  It's just that I get the feeling that a lot of drummers don't appreciate the fact that Songo isn't a pattern or sticking, but a style, to which there is much more than this one way of playing that is often shown to be the "correct" way.

Check out where the clave fits in the pattern above:

This can just as easily be played in 3-2:

And of course this is, by far, not the only sticking and/or orchestration that we can employ, as we can see in the Tain video.

There are plenty of hits in this tunes, so rather than transcribe the whole video and end up with a lot of superfluous material, I decided to grab the sections of groove that could easily be applied elsewhere, as well as some fills to go along with them.  You'll have to use your ears and some common sense, but you could likely take a lot of these grooves and mix and match them with the fills at various points to come up with some nice ideas of your own. 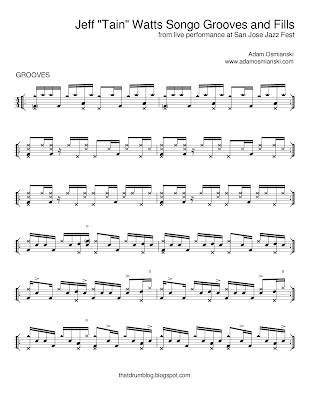 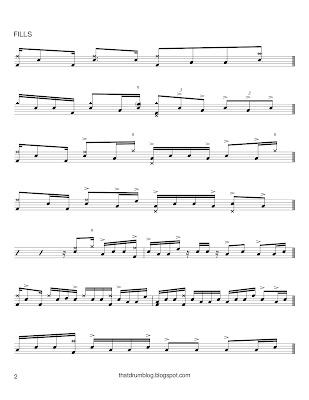 Posted by Adam Osmianski at 1:16 AM No comments:

I currently have a young student who, at just 13 years old, is already pretty far ahead of his peers in terms of his jazz drumming game.  He listens to all the right things, and has more language than many students five years his senior.  When I first met him at 11 he told me his favorite drummer was Art Blakey.  One thing he lacks, however (at least right now), is control.  We are currently working on a Philly Joe solo and he is struggling to move seamlessly between the various stickings that Philly Joe employs, and to control the height difference between accents and taps; a contrast that Philly Joe always does to great effect.  So I created this simple exercise that combines paradiddlediddles and double paradiddles, which can be heard all over records featuring Philly Joe.  This more of a general exercise in control, but if you'd like to dig deeper into Philly Joe language with these stickings, Todd Bishop has a great post about it over on Cruiseshipdrummer. 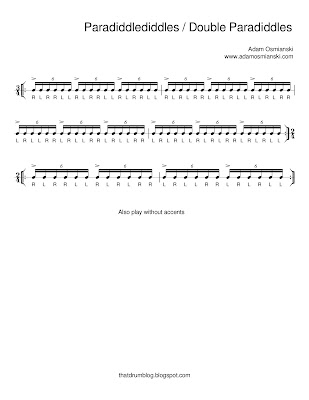 Posted by Adam Osmianski at 3:49 PM No comments: 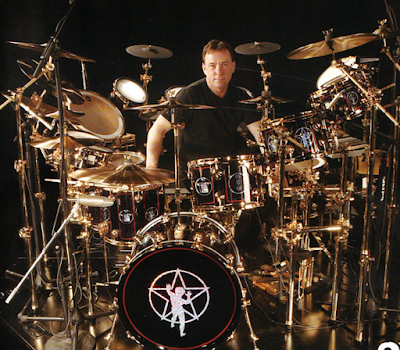 There's not going to be much, if anything, that I can say about Neil Peart that hasn't already been said, or isn't already known, but I would be remiss if I didn't make mention of his sad and untimely passing.  Especially as Peart, for me, like legions of other drummers, was a huge early influence.  All told, the amount of time I spent playing along to Rush records would surely not be measured in hours, or even days, but likely weeks.  As I grew older, other styles of music took my interest, and I eventually got to where I rarely listened to Rush, and never played the tunes.  But anytime The Spirit of Radio, Limelight, Free Will, Tom Sawyer, etc., etc. came on the radio I was immediately transported back to the early days of my drumming development, and could play each tune note for note.  Regardless of your taste in music, there is no denying Neil Peart's contribution to the drumming world.  Generations of drummer would not be the same without him.
Posted by Adam Osmianski at 11:45 PM No comments: