Dig This - The History of Jazz Drums with Mel Lewis

In 1989, saxophonist Loren Schoenberg did a series of interviews with Mel Lewis on the history of jazz drumming.  These interviews have been talked about and passed around for years, but now, in the internet age we can pretty much get our hands on anything at any time.

A handful of them are available on Loren's YouTube channel, accompanied by some really cool pictures.  But for the ones that aren't, Texas State University has conveniently put them all in our place on their website:
https://media.music.txstate.edu/schoenberg/HistoryofDrums.html
Posted by Adam Osmianski at 11:55 AM No comments:

One of the few pluses of this period of zero gigs is that fact that with no other music to prepare I have reverted to just playing any old random thing for fun, and reaching deep in the bag for different material.  So, the other day when an old pop record that I used to listen to in college came to mind, I gave the whole record a spin, transcribed the grooves from a few of the tunes, and started playing along with them.  The record is Kenna's New Sacred Cow.  It's not the deepest record in the world, but it's nostalgic for me, and actually has some pretty cool grooves on it.  Also, I like working on grooves that weren't necessarily written from a drumset perspective as it forces you to think and play in a different way.  So here are three of grooves, should you feel so inclined.
hellbent was one of the singles from the record and, besides having an interesting groove that is reminiscent of a half-time shuffle, it has a cool video to go with it (though it doesn't seem to be on YouTube, unfortunately)

vexed and glorious has some nice counterpoint between the tambourine (notated as a cymbal here) and the rest of the kit.  If you play or sing them separately they really feel like two parts that would be played be different people.  But when you stick it all together it feels nice and is a lot of fun to play.

And finally, war in me.  The drums don't come in until at least halfway through the tune, but again, it's a groove written most likely at a desk rather than behind a kit, which gives it an unnatural feel that is nonetheless very enjoyable to play.

Posted by Adam Osmianski at 6:07 PM No comments: 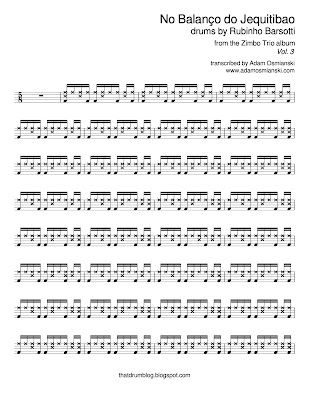 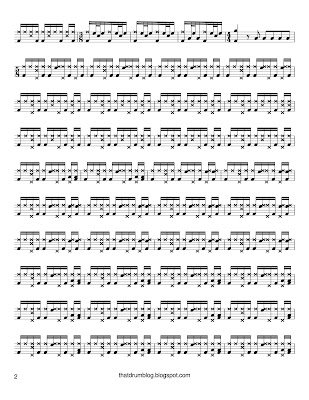 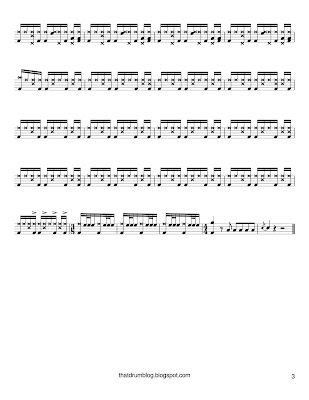 Posted by Adam Osmianski at 10:26 PM No comments:

Throughout the Covid era, the Drummer's Collective have been offering online workshops with some fantastic guests, including Jeff "Tain" Watts and, most recently, John Riley.  For me, one of the highlights of the evening was when John shared with us an exercise developed by Philly Joe Jones using the ubiquitous Saul Goodman timpani book.  Not only is it a neat little exercise, but it was in Philly Joe's own handwriting from his stint in London. 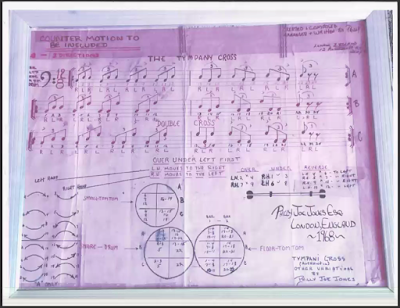 The gist of the exercise is that Philly Joe simply took some of the crossover exercises from Saul Goodman's Modern Method for Tympani and applied to the drumset.  The book is a staple of percussion study and has been used by countless students since it was first published in 1948.  I still have my copy sitting in a filing cabinet somewhere from the last time I played timpani, which was probably 15 years ago or more, so I might just have to pull it out and get some use out of it again.
Posted by Adam Osmianski at 7:52 PM 1 comment: