An entrada is exactly what the word translates to, an entrance.  This entrance takes a slightly different form depending on the style of samba.  In a batucada or enredo setting, this is more of a bold statement, announcing that the tamborims have arrived to the party.  It reminds me of the way a conga player plays his big fills after the downbeat of the next section, rather than leading into it.  Some batucada-style entradas are longer than two bars, and generally lead to the carreteiro style of tamborim, which is the constant swinging 16th notes achieved by turning the drum with the left hand.  Some of these entradas are traditional and commonly heard across various groups, whereas other are composed for a specific escola de samba or their enredo (show) for the year.  A few examples: 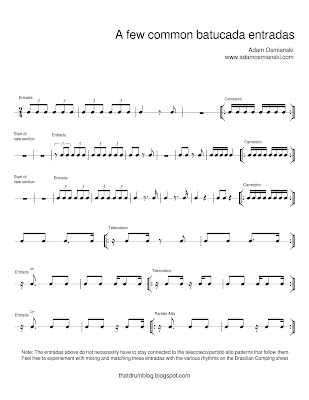 In a pagode setting, however (or on a drum kit in our case) an entrada is simply a way to set us off on the right foot, especially when our telecoteco is likely to begin on a syncopated note.  We discussed last time about how telecoteco has an “up” side and a “down” side.  To start on the down side you could probably get away without playing an entrada at all as the pattern starts clean on beat one.  However, to start on the up side we use the entrada to set our ears and sense of time before we get into the heavily syncopated pattern that just seems to effortlessly roll over barline after barline.  This could be as simple as adding one downbeat to the start of the syncopated side….

But, more often, an entrada is two bars long.  A few examples….

Generally, these entradas start on the downbeat of a new phrase, but I have occasionally heard them played in the two bars leading to the new phrases, almost like a fill, such that once the downbeat of the new section is reached the listener is already hearing telecoteco.  Here’s an example of this that we’ll talk more about next time.

Finally, I know I said that entradas start on a downbeat to set our ears, but there is one instance in which it starts on a syncopated note.  One syncopated note on the “e” of one, followed by some steady 8th notes until the start of the phrases is reached.  That lone 16th note is generally given a pretty sturdy accent, sort of like a kick in the pants to get the section going. 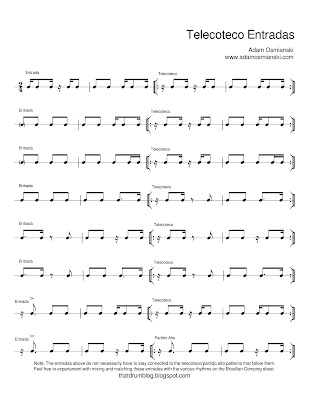 Posted by Adam Osmianski at 11:57 PM No comments:

Pianist/singer/songwriter, Joy Ellis, with whom I've been working for 10 years now has just released her new album, Dwell, to some lovely reviews.  Putting this record together was a lot of fun and a good challenge for me as Joy was after some unique rhythmic ideas.  Trouble was, she didn't know exactly what she wanted, but she did know exactly what she didn't want.  So, I was forced to come up with some new grooves with which I am pretty happy.  Two in particular that I felt came out nicely were "Castles" and "Family Tree"


I've also gotten a lot of compliments on the snare sound of the title track, "Dwell".  Funnily enough, this is an old Yamaha Maple Custom which was missing one lug entirely.  I tuned it all the way down until it was just barely finger tight, and put a wash cloth on about a quarter of the head.  We recorded at the phenomenal Eastcote Studios in London, and despite being surrounded by thousands of dollars of drum mics, engineer, George Murphy, opted to simply put a good ol' SM57 on it. 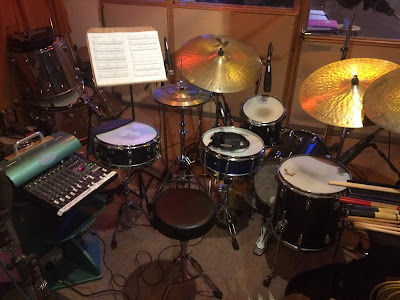 You can check out the entire album in the sidebar.

Posted by Adam Osmianski at 11:25 PM No comments: