As promised in an earlier post I've got some more Edu Ribeiro for you today.  His group, Trio Corrente, with pianist Fabio Torres, and bassist Paulo Paulelli, recently won the Grammy for Best Latin Jazz Album with Song for Maura, which they recorded with legendary Cuban saxophonist Paquito D'Rivera.

But this tune, "Lamento", which is a classic Pixinguinha choro, comes from the group's first album, released almost 10 years ago.  Apparently they recorded the whole thing in one afternoon in Edu's practice space.  I first heard it back when I was just beginning to discover Brazilian jazz and was completely blown away.

Ribeiro has one of the fastest right hands you will ever see.  But that's certainly not to say that he's just some unmusical freak show.  The touch and subtlety with which he applies his burning 16th notes is second to none.  More importantly he is without a doubt one of the swingingest cats out there today.  He obviously has a very strong knowledge of the history of Brazilian jazz as you can clearly hear the influence of drummers like Milton Banana, Edison Machado, and Toninho Pinheiro in his playing.

I'm getting ahead of myself a bit, though, because this post isn't really about his groove playing, but rather his soloing.  One of the coolest things about Edu's solos on this record is that although you can certainly feel the Brazilian swing, they are not so idiomatic that you couldn't use them in many other musical settings.  Many of the phrases within these solos would work just as well if it were applied to an uptempo swing tune.

The band are trading here, hence the groupings of the systems, but as choro forms aren't as simple and rounded as many jazz standards, the length of each section varies.

Feel free to send me an e-mail if you'd like a PDF. 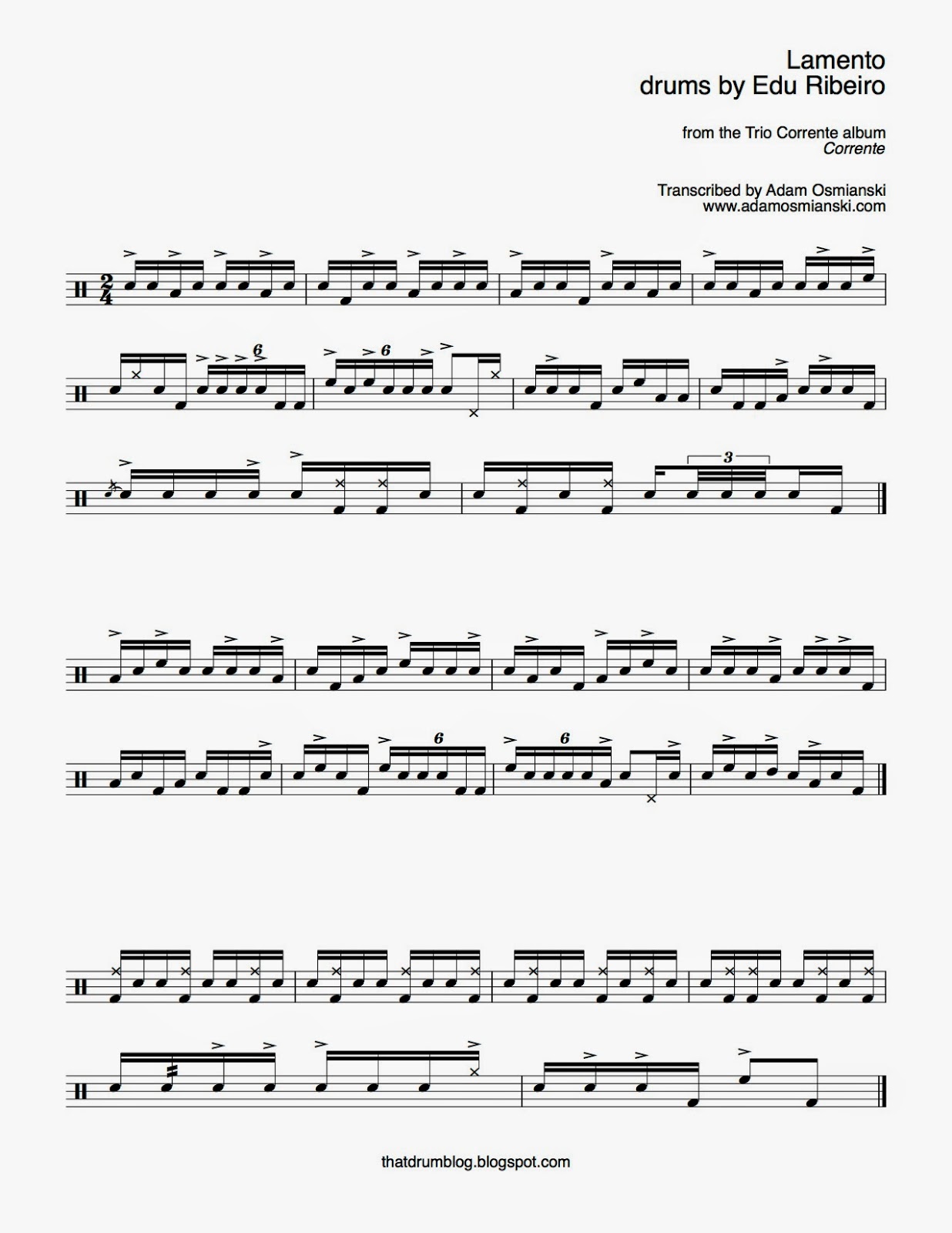 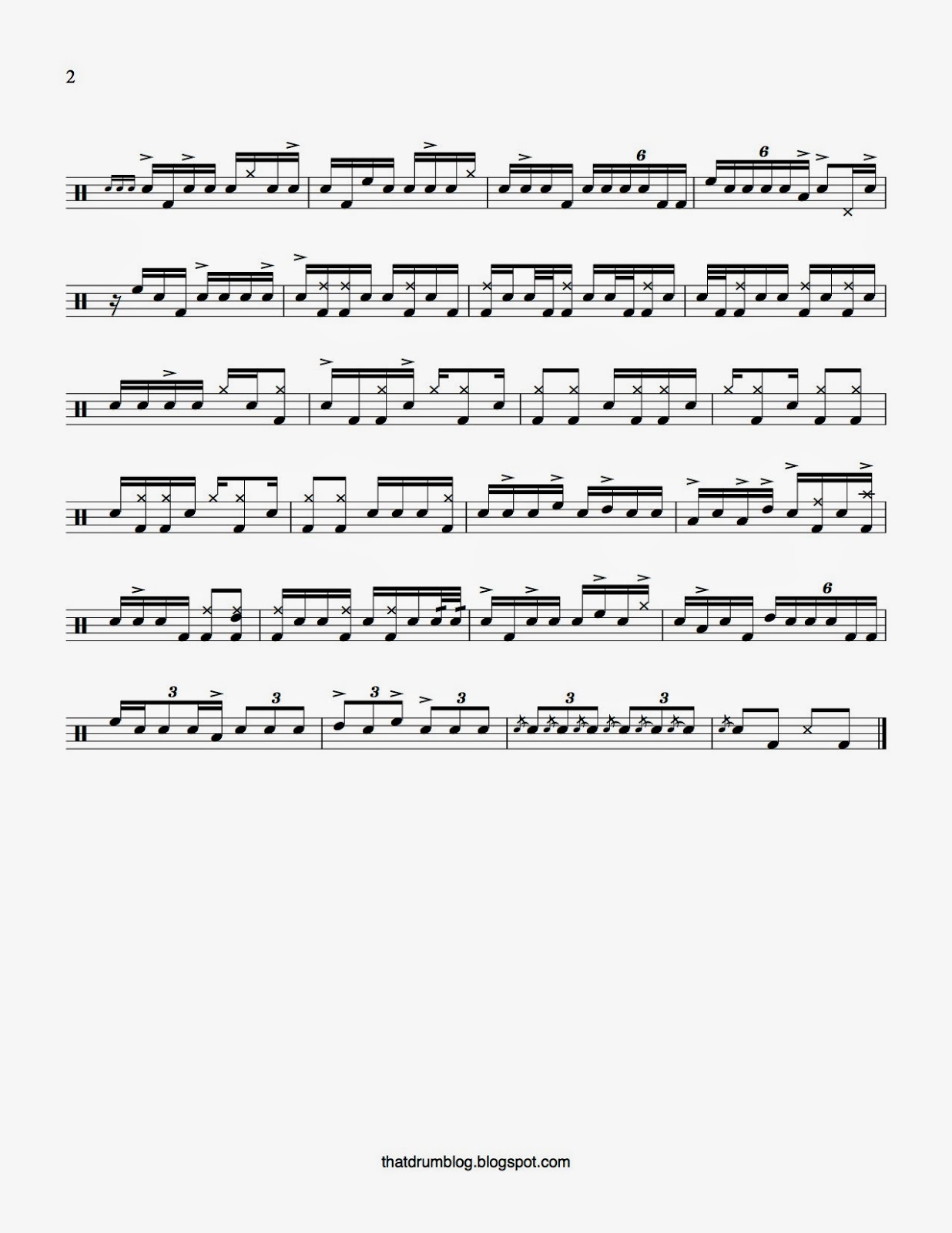 A few months back I posted a Four Limb Triplet Warm-up that was inspired by some licks that Tony Williams often played.  Many of you really seemed to like it, as I've received quite a few requests for more exercises of that ilk.  So here you go.

This time it's a duple based exercise though it's overall purpose is the same.  The idea is to strengthen the sense that the time you are playing is coming from all four limbs, rather than playing time, or an ostinato with one limb, while the other limbs accompany it.  Tony and other players like Elvin Jones fostered the concept that the drumset was one singular instrument, rather than a collection of instruments being played all at the same time.

You'll notice that each exercise contains groupings of 3, 5 or 7 notes.  However, resist the urge to think of these as 3/8, 5/8, or 7/8 over 4/4.  Rather, use each exercise to feel how the notes act with/against each other.  Remember, we're playing music, not doing math.  Also, despite the fact that each example naturally resolves after 3, 5 and 7 bars respectively, don't feel as though you have to play these in odd phrases, or even 4 bar phrases for that matter.  Heck, you don't even have to think in 4/4.  I haven't written time signatures or repeats for a reason.  Just play continuously for a few minutes, and focus on how the groupings feel against the steady quarter note pulse.

Much like the Triplet Warm-up I found this exercise really helped me to relax and develop a smoother flow around the kit, as well as improve balance both dynamically between my limbs, and physically on the stool.

Experiment with different variations, lead with the opposite hand, and move it around the kit to make it your own.  Leave a comment if you have any questions, and let me know how it works out for you.  PDF available on request. 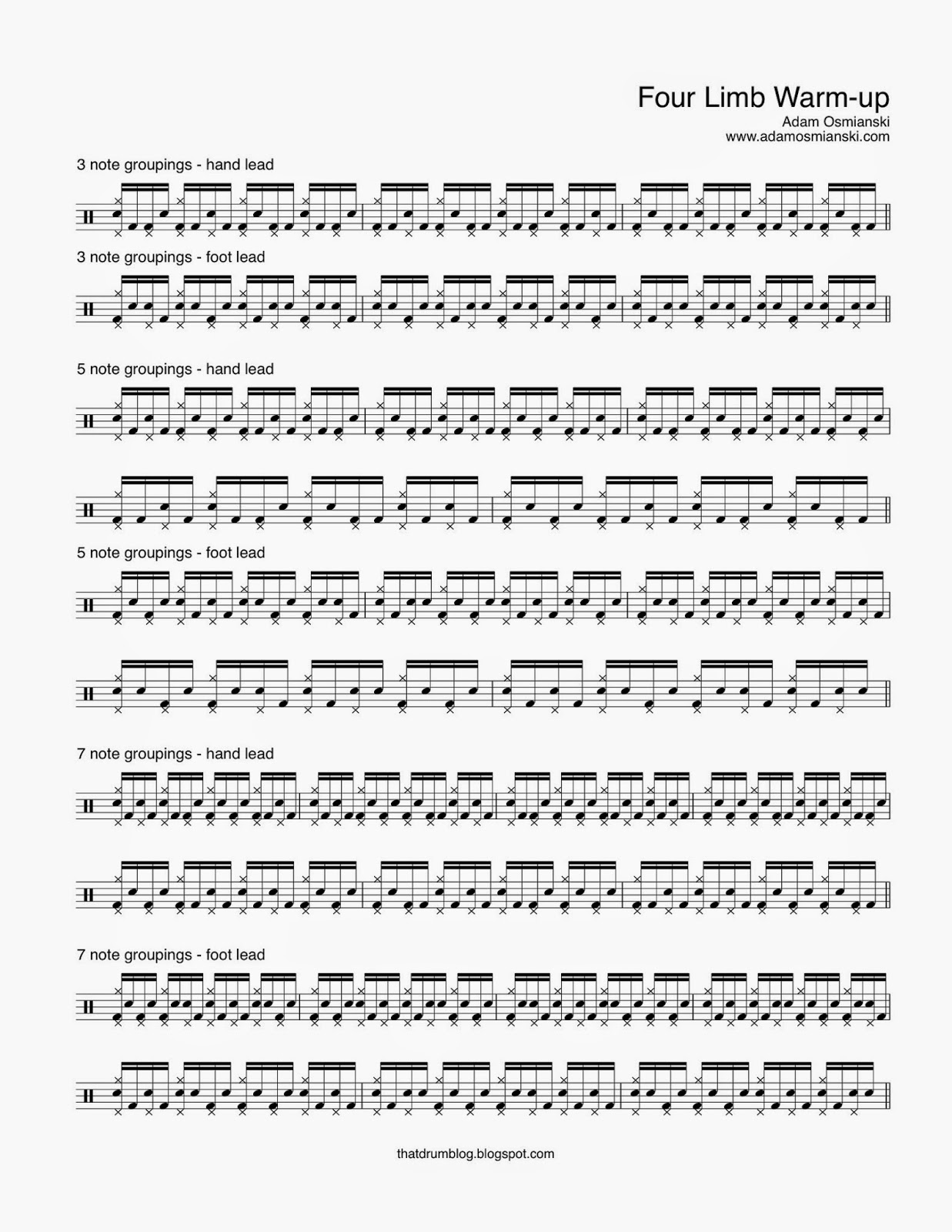 Posted by Adam Osmianski at 7:40 PM No comments:

Another one of Brazil's finest these days is Kiko Freitas.  For the last 15 years he has been the drummer for Brazilian legend João Bosco.  Along with two other members of Bosco's rhythm section, guitarist, Nelson Faria, and bassist Ney Conceição, they form their own group called, oddly enough, Nosso Trio, which is Portuguese for "Our Trio".

We all have our bag of tricks that we like to reach into, and recently one of Kiko's really started jumping out at me.  As soon as I heard it once I began hearing it everywhere.  It's a very cool lick which he seems to go to a lot.  Apparently Freitas spent some time in LA studying with Dave Weckl, and if that is indeed true, you can certainly hear it in these licks.  It has an undeniable fusion vibe to it, but with Kiko's inherent Brazilian feel.

There seems to be a formula to this lick that he follows pretty closely.  The first part is ghost notes in the left hand - usually on the hi-hat and sometimes on the snare - combined with right hand accents around the kit for the first beat and a half to two beats.  Generally these accents fall on the e's and a's which is what really accentuates the Brazilian feel of it.  This is followed by some sort of linear foot-hand-hand combination.

Here are a couple of different orchestrations:

In longer phrases, Freitas often likes to added a dotted eighth note figure, usually on a short, trashy cymbal sound like a stack or a china, though occasionally he plays this with the bass and floor tom as in the last of these three examples.  Note that the first bar of each of these follows the exact same formula as above, followed by the dotted eighth figure in the second bar.

Posted by Adam Osmianski at 5:04 PM No comments:

Here's one of my favorite Zigaboo Modeliste grooves; the title track from The Meters' second album, Look-Ka Py Py.  There's a little bit of play with ghost notes and such, but for the most part this is what the groove looks like:

And at around 0:48 you've got this delicious little drum break:

Many of Ziggy's beats have been sampled by some of the biggest names in hip-hop, such as The Beasties Boys, Run DMC, N.W.A., Public Enemy, Digable Planets, A Tribe Called Quest.  "Look-Ka Py Py", in particular, was used by DJ Shadow (4:48)….

Posted by Adam Osmianski at 4:52 AM No comments: