If you listen to or create jungle, drum 'n' bass, breakbeat, hip-hop music, etc., you owe G.C. Coleman a beer.

Well, you would if he were still with us.  Mr. Coleman bestowed upon us "The Amen Break".  Whether you realize it or not, you know this break.  The song from which it comes, "Amen, Brother", was originally recorded on the B-side of a pretty successful record called "Color Him Father" in 1969 by a band called the Winstons.  However, the four bar break in the middle of the tune turned out to be more successful than the song itself as it became the backbone of jungle and drum 'n' bass music, and one of the most sampled breaks of all time.  It's been sped up, slowed down, pitch changed, chopped up, EQ'd and anything else you can think of probably a thousand times over.

You can read more about the background and influence of the break on Wikipedia.  The BBC also did a piece on it recently.  Both worth checking out.  But we're here for the notes.

If you ever find yourself in a situation where you're asked to play a drum 'n' bass, or even a hip-hop groove, this break is probably a really safe place to start:

You didn't think I'd leave you without some practice loops, did you?  First is the original:

If you need some time to get in under your hands, here is a slower version.  I left the analog locked for that fat breakbeat sound.

Once you've got a really good grasp on things, try it at a DnB tempo.  Again, analog locked for authenticity.


And lastly but not leastly, here is the whole tune, in its entirety:

Posted by Adam Osmianski at 1:44 AM 2 comments:

I recently received an e-mail from a former student with whom I worked on a lot of Brazilian music.  He was asking about some of the break-neck speeds that many Brazilian drummers get out of their right hands.  It turned out to be a rather lengthy response, so I thought I'd share it with you all.

There are a few different approaches to that kind of right hand speed:


*Wrist
I once interviewed Cuca Teixeira, who is Maria Rita's drummer, and asked him a similar question.  He said that many Brazilians, simply from years of doing it, and the style of music they grew up playing, have really fast wrists.  Some finger is surely used as well, but in general, many of these guys just have really fast hands.  I realize that's not much of an explanation, but that is to say that I think this approach just takes a LOT of time to develop.

Check out how firm Cuca's hand is in this video:

This one isn't nearly as fast, but you can get a better look at his hands:

*Fingers
This is what I use the most.  French grip (ish), with all of the speed coming from the fingers.  Technically, as you may know, French grip is a three point fulcrum where the thumb sits in between the index and middle finger.  I once heard a symphony timpanist say that if you lost your ring and pinky fingers you could still be a great timpanist.  So it's not really French grip in that I'm using all of my fingers.  Also, rather than a typical fulcrum where the thumb and index finger are directly across from each other, my thumb actually sits a little bit in front of my index finger so that I can use all four fingers to move the stick.  This is just my personal approach.

Edu Ribeiro, who is probably the fastest guy out there, uses this technique, although he seems to use more of a standard fulcrum - thumb and index finger directly across from each other.

Here is a video of him talking about this technique (starting around 6:30):


There are a lot of great videos of Edu playing with this technique on YouTube.  Search his name with "bateria", as there are other Edu Ribeiros out there, and also check out some live videos of Trio Corrente:

*Push/Pull
You've probably heard of this before.  There are a million videos on YouTube about it.  Jojo Mayer gives a nice breakdown of it on his Secret Weapons DVD, and Gordy Knudtson has some good videos about it as well.  In short, you play a stroke with your wrist/hand and allow the stick to rebound with your fingers relaxed.  Then, as you are lifting your hand in preparation for the next stroke you close your fingers, creating another stroke.

If you are going to use this technique in a samba setting I suggest inverting the strokes.  Play the downbeats with the fingers, and upbeats with the wrist.  Because the wrist strokes tend to be stronger it will fit the samba style more, and you will feel the emphasis on "e, a, e, a" more naturally.

I just recently discovered a video of a Brazilian drummer talking about this technique.  He also talks about a three note grouping idea which seems pretty cool.  If you use the "Moeller pumping motion", as it's often called, you can achieve a string of rapid 16th notes, albeit with an accent on the first of every three notes.  It actually fits the samba feel quite nicely.

*This Other Thing
I have no idea what this is called, but I've seen more than one Brazilian player use it.  The fingers remain pretty stationary, while the stick is moved laterally, catching the cymbal in each direction.  I've seen players use a sweeping kind of motion, while others do it with more of a twisting motion.

Here is a video of Cesar Machado (no relation to Edison) using this technique:


Marcio Bahia, who previously played with Hermeto Pascoal, and currently works with Hamilton de Holanda uses this technique quite a bit with brushes.  Bahia is left-handed, so if you're a righty and trying this idea you may want to flip the hands.  Start around 7:10.


I asked Marcio about this technique once and he said:


"It's a very good tool to increase speed playing 16ths on hhat on medium/up, or fast tempos...I really don't know [where] or [who] came first playing like this.  We've learned just watching street smarted drummers doing, [which] I love it!  And works so cool!  Just relax your wrist and bounce it from side to side with sticks on a loose grip, not [tightening] them."

As promised awhile back, here is a transcription from the great (and often overlooked) Larry Bunker trading with Chuck Israels and Bill Evans on the British television show Jazz 625.

I'd have to say that Larry Bunker is my favorite drummer with Bill Evans, which I realize is a bold statement, given that he's keeping the company of Paul Motian, Philly Joe, Jack DeJohnette, Marty Morrell and Joe LaBarbera, amongst others.  To my ears Bunker contributes to the most cohesive ensemble sound of any Bill Evans trio.  Don't get me wrong, Philly Joe, Paul Motian and Jack D are some of my favorite drummers, but I can't help but hear Philly Joe, Paul Motian and Jack D more as their individual selves with Bill Evans.  They have such strong musical personalities that they really stand out, intentionally or not.  To be fair, the fact that I don't get that vibe from Larry Bunker could be due, in part, to the fact that he is not as widely known as the other drummers I mentioned.  Either way, Bunker tucks himself right into the ensemble, not standing out too far, but certainly not disappearing to the background to be overshadowed by Evans.

Apparently Humphrey Lyttelton, the host of Jazz 625, agrees with me:

"Larry Bunker also studies piano and vibes which is, perhaps, why he contributes such subtle musicianship to a trio in which every instrument is of equal importance"


Check out the full show here. 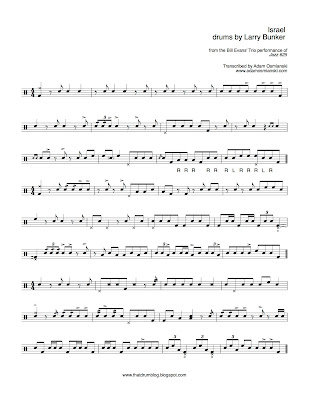 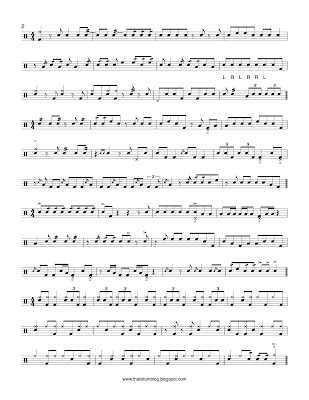 Posted by Adam Osmianski at 10:42 PM No comments: