I've been working with some of the lesser-played pages of Stick Control lately and have really been enjoying the "Flam Beats" from page 16 to 23.  However, you may have noticed that the way Stone notates the stickings - with an F for a right flam and an F in a circle for a left flam - is less than ideal. 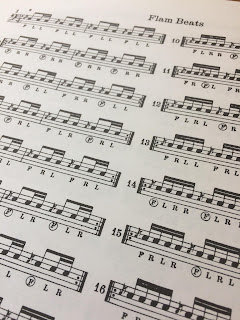 I mean, it's certainly readable, but even now I still occasionally mix them up, and some of my students really struggle with it.  So, seeing as it's no longer the standard flam notation - if it ever even was - I just decided I'd take a few minutes, crank the exercises into Sibelius and put in the "normal" stickings as a little Christmas gift to you/myself/my students.

So far I've only done the first 18 exercises from page 16, but hey, it's Christmas; it's the thought that counts.  Maybe I'll do some more at a later date.  I hope this is helpful for you.  Merry Christmas! 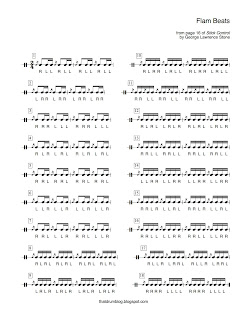 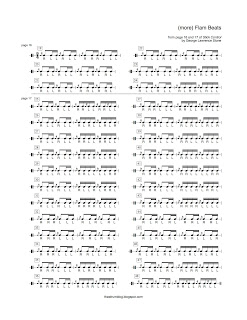 Ted Gioia has just released his 100 Best Albums of 2016.  If you're not familiar with Gioia, he is a writer, historian, critic, what-have-you.  I've read and thoroughly enjoyed quite a few of his books.  He's also got tons of great articles on his website which are certainly worth a browse.

For the last 5 years, Ted has been compiling his favorite 100 albums of the year.  He claims to listen to over 1,000 new releases every year (1,021 in 2016).  Where he finds the time to listen to each of these in-depth enough to rank them while still finding time listen to old favorites as well as write, practice, and do whatever else it is he does, I'll never know.


"Like any music lover, I enjoy sharing my favorite music with others.  But in the last few years, a different motivation has spurred me.  I believe that the system of music discovery is broken in the current day.  There is more music recorded than ever before, but it is almost impossible for listeners to find the best new recordings.  The most creative work in music is increasingly found on self-produced projects and release from small indie labels - to an extent hardly conceivable only a decade ago.  Very little of this music ever shows up on the radio, where formats seem to get narrower and narrower with each passing year.  Music fans once heard good new music at indie record stores, but most of them have closed.  Or they could read reviews in the newspaper, but both the newspapers and the music reviews are shrinking or disappearing.  And the big record labels are the worst culprits of all, picking acts for their looks or their potential appeal to fourteen-year-olds, or some other egregious reason, and in general jumping on the must trivial passing fads.  On the other hand, the Internet presents an almost infinite amount of music and music commentary - yet where do fans even begin to separate the good from the bad and ugly?  My personal solution to this dilemma has been to listen to lots and lots of music, and try to identify recording of quality and distinction.  I share my list because I know, from past experience, that many other listeners are frustrated with the broken system of music discovery, and are also looking for good new music"

Personally, I miss the record store days (in my time it was mostly cassettes, then CDs), where you would hear one song on the radio or maybe MTV and you would just go out and buy the whole album on blind faith with the money you saved up from mowing lawns.

So in an effort to recapture that vibe, a few years back I started checking out Ted's list each December and just picking a handful of his choices based on the description (and let's face it, the cover), and ordering the CDs.  I have yet to be disappointed.

Ibeyi - Twin sisters from France with Cuban roots.  They sing in both English and Yoruba, often singing about Orixas for those of you that are into Camdomblé.  There is a Björk-like influence, but they have certainly got their own thing going on; lots of Cuban rhythms and bata drumming blended with electronic beats.


Fabiano do Nascimento - 7-string guitarist from Brazil.  The album is almost entirely guitar and percussion, save a few vocal tunes, which are actually some of my faves.  There is only one original tune on the record, but his choice of covers is impeccable.  He's got some Hermeto Pascoal and Baden Powell pieces, as well as some really nice folkloric tunes, like Ewe.


Daniel Bachman - Killer solo guitar music.  It's not bluegrass per-se, but it reeks of the influence.  Daniel is a young guy from Fredericksburg, Virginia, and you can hear it.  I was born and raised in southwestern Pennsylvania, and lived for seven years in West Virginia, so I've got a real soft spot for this Appalachian sound.  I don't know what his background is as far as training, but to me, his playing has a beautiful rawness that leads me to believe he is self-taught.

Posted by Adam Osmianski at 12:20 PM No comments: