Rachael Sprague at Tutorful, has put together a nice collection of drumming reference material ranging from YouTube channels, books, apps, forums and *ding* blogs.  It appears that there are people out there who enjoy what I do here at That Drum Blog, and Rachael was kind enough to include the blog in her editorial.

Do follow the link and check out the article.  There's a lot of great stuff, some of which I wasn't yet familiar with and am looking forward to checking out.

Many thanks to Rachael for her efforts and for including my little slice of the internet, and to all of you who read the blog.
Posted by Adam Osmianski at 12:17 PM 2 comments:

Dig This - Curb Your Enthusiasm with drums

Drummer David Dockery has been gaining quite a following on YouTube with his incredibly clever videos in which he writes rhythmic parts to clips from his favorite movies and shows.  And just the other day he posted a new one with a great scene from Curb Your Enthusiasm:

David is very creative in the way he find groove and rhythm in speech.  Another one of my favorites is a clip from It's Always Sunny in Philadelphia:

Head over to YouTube and check out his channel.  In the meantime here are a couple of other particularly good ones:

Email ThisBlogThis!Share to TwitterShare to FacebookShare to Pinterest
Labels: Dig This

Here's a fun samba funk groove that I derived from some Marcio Bahia ideas.  Marcio tends to play a groove very similar to this but with a busier left hand.  As I was playing through some of the different variations today I noticed that it can be simplified down to a linear pattern that still grooves hard and is fun to play.

I'm going to go into more detail on samba funk in a future post, but simply put samba funk has pretty much all of the same characteristics as a "regular" samba groove but with a backbeat on beat one of the second bar (if you're counting in 2/4).

Marcio's funk pattern very cleverly has what you might notice as the bossa nova pattern (also known as the Mocidade caixa pattern) in the right hand on the hi-hat, and a common third surdo pattern on the bass drum.  As I mentioned, Marcio gets a little bit sexier with the *left hand, but if we just fill in the gaps between the hi-hat accents and bass drum part with some ghosted snare notes it becomes a cool linear groove.  Just remember to accent the snare on beat one of every other measure.

Here's a little triplet sticking thing I was fooling around with today when a student didn't show.  Back in my drum corps days the kids used to call these "pub-duh-duh's".  Regardless of what they're called, they feel nice to play and make a good warm-up. 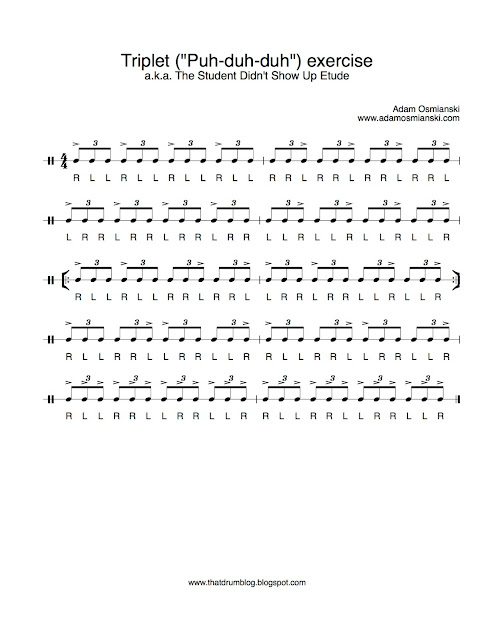 Posted by Adam Osmianski at 10:19 PM No comments:

It appears as though the drumming community has lost another one of it's greats.

According to his Facebook page, John "Jabo" Starks has passed away.

Spin a little James Brown or B.B. King today and play some grooves to thank Jabo for all the great music. 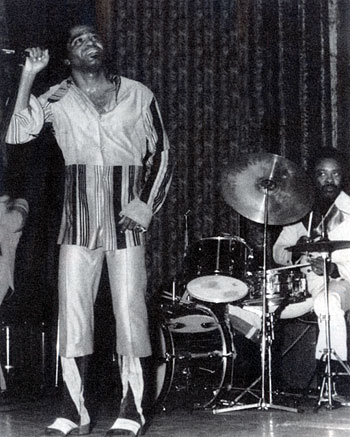 Posted by Adam Osmianski at 10:44 PM No comments: