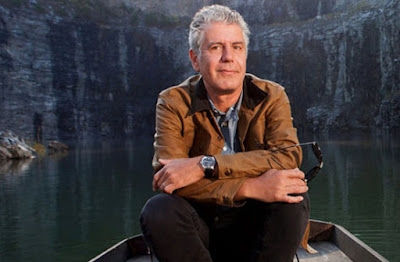 Celebrity culture is such a funny thing.  It's strange that people who we've never met can have such an impact on our lives.  But they can, and they do.  I've written before about musicians we've lost who have had an impact on me.  Anthony Bourdain, though not a musician (that I know of), has had a similar impact on me.

I discovered Bourdain sometime around 2008 when I really started traveling a lot, and he quickly became my go to guy.  His show got me excited for trips, gave me ideas for where I was going, and the inspiration to visit other places.  I remember reading some of his books, both fiction and non-fiction, and watching episodes of his shows while on said travels, and I've had some truly wonderful meals and memorable days out based on his recommendations.  Pretty much any time I go somewhere new I tend to Google "Anthony Bourdain (insert city here)"

One Bourdain quote sticks out to me clear as day.  I remember watching the episode and hearing this epilogue as the credits rolled and relating to it so much.


“Travel isn’t always pretty. It isn’t always comfortable. Sometimes it hurts, it even breaks your heart. But that’s okay. The journey changes you; it should change you. It leaves marks on your memory, on your consciousness, on your heart, and on your body. You take something with you. Hopefully, you leave something good behind.”

Anthony Bourdain was one of those guys I had always hoped to sit down and have a beer with.  I hope that whatever it was that he was struggling with isn't weighing on him any longer and that his family are holding up.

If you ever have the opportunity to travel anywhere (through music or otherwise) I hope you jump at the chance.  And if you're looking for something to do, or somewhere to eat, simply search for the place you're in and follow it with Anthony Bourdain.
Posted by Adam Osmianski at 4:34 PM