In the May 2014 issue of Modern Drummer Magazine I touched on a few transcriptions by Marcio Bahia.  Despite the fact that he's been around for a few years - I believe his first big gig was in 1980 with Hermeto Pascoal - Bahia is still one of the most modern sounding drum set artists in Brazil today.  He keeps busy with a number of projects, but the gig he's probably the most well known for at the moment is with bandolim virtuoso Hamilton de Holanda.

I recently found this live performance of Bahia performing a de Holanda composition with his own group.

As the melody gets passed around and doubled, and the tune weaves through its different sections, Bahia revoices the samba to match it.  Let's check out a few of the ways he approaches it.

One of the best lessons I learned from digging on a lot of Marcio's playing is to play "1e&" on the hi-hat or ride rather than "1&a".  We (in this case referring to Americans or Europeans) tend to play "1&a" a lot, presumably by force of habit from playing so much of the standard jazz ride cymbal pattern.  But as Bahia often points out, it's a bit pointless to play it this way.  There are two reasons for this:  A. Often times we are already playing that exact same rhythm in our feet to begin with.  "1" on the bass drum, "&" on the hi-hat, and "a" on the bass drum again.  Why double it?  And B.  We're missing the "e", which is one of the most important notes in a samba.  The "e" always has that slight emphasis on it, which is impossible to do if you don't play the note at all!  Also, by playing "1e&", we mimic the drive of a caixa more.  So, in measure 17 we see Bahia playing "1e&" on the hi-hat.  Another cool feature of the groove in this section is that he uses the rim click, rather than the bass drum for the "a1, a2" effect, which frees up his foot to play more like an actual surdo would in an escola de samba.  Throughout this section he also uses the rim to hint at both bossa nova and partido alto patterns.

Shortly after the first 6/8 bar, when the guitar takes the melody alone, Bahia revoices things sightly, like so:

Here he drops the pickup note on the "a" of 1 in the bass drum and instead adds a push on the "a" of 2 in every other bar.  But, generally speaking, the basic sense of the bass drum (or surdo) remains the same here.  However, he now moves the bossa nova pattern up to the hi-hat, while filling in the gaps on the snare drum.  Even though the familiar pattern is still there and we still hear the underlying flow of light 16th notes, the change of voices makes it sound unique and modern.

Finally, each time the second half of the melody comes around, we see something that is probably more familiar to most of us:

As noted earlier, the ride cymbal pattern is played "1e&" rather than "1&a", but now Bahia is playing the bass drum pattern that most of us learned when we first discovered samba.  However, even here there is a slight variation.  By simply moving the hi-hat from the "&s" to the downbeats, or leaving them out altogether (both of which Bahia does at various points in the tune), we can drastically change the character of the groove.

Throughout the rest of the performance there are a few other grooves and ideas that are certainly worth checking out.  Here is the head in its entirety.  Enjoy! 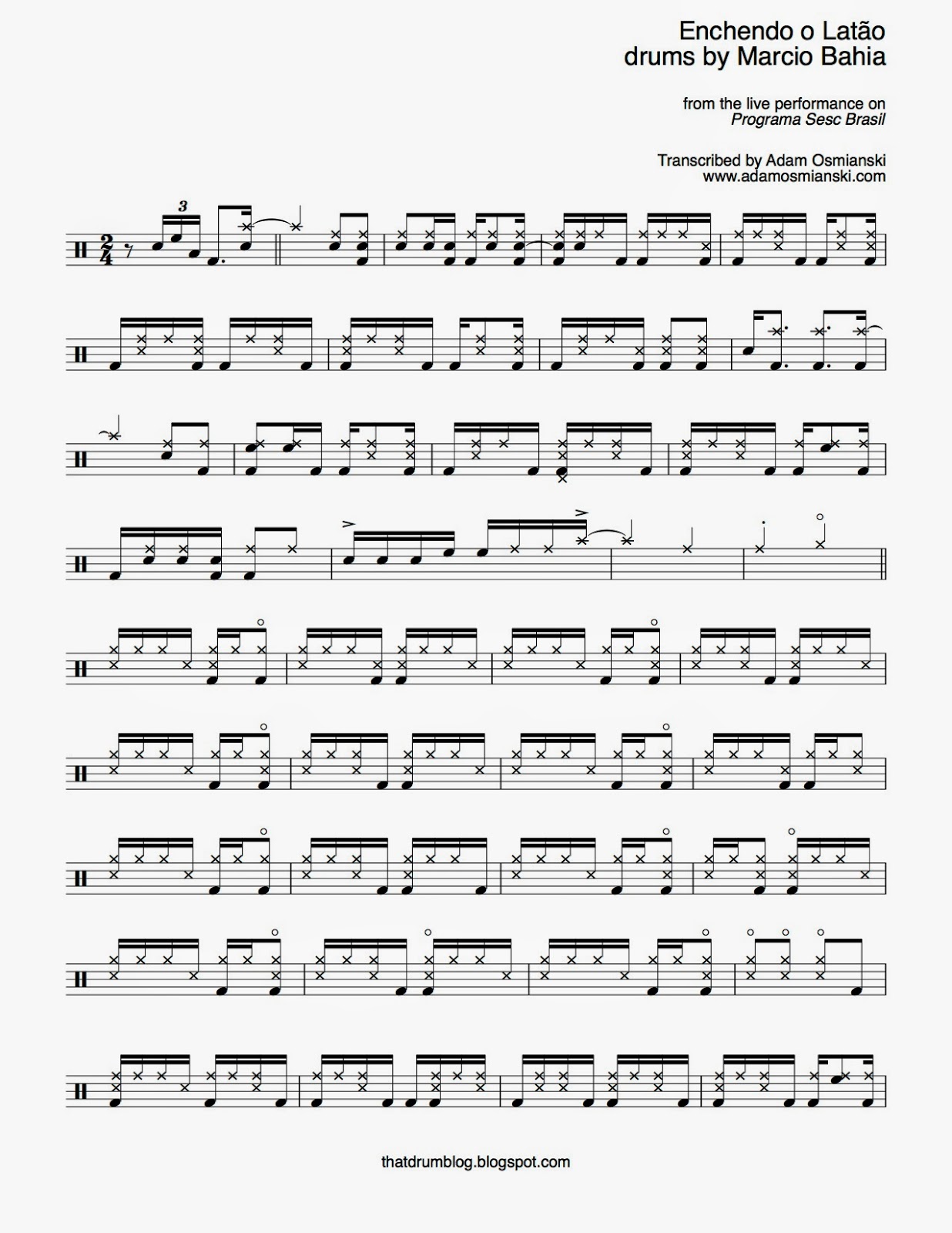 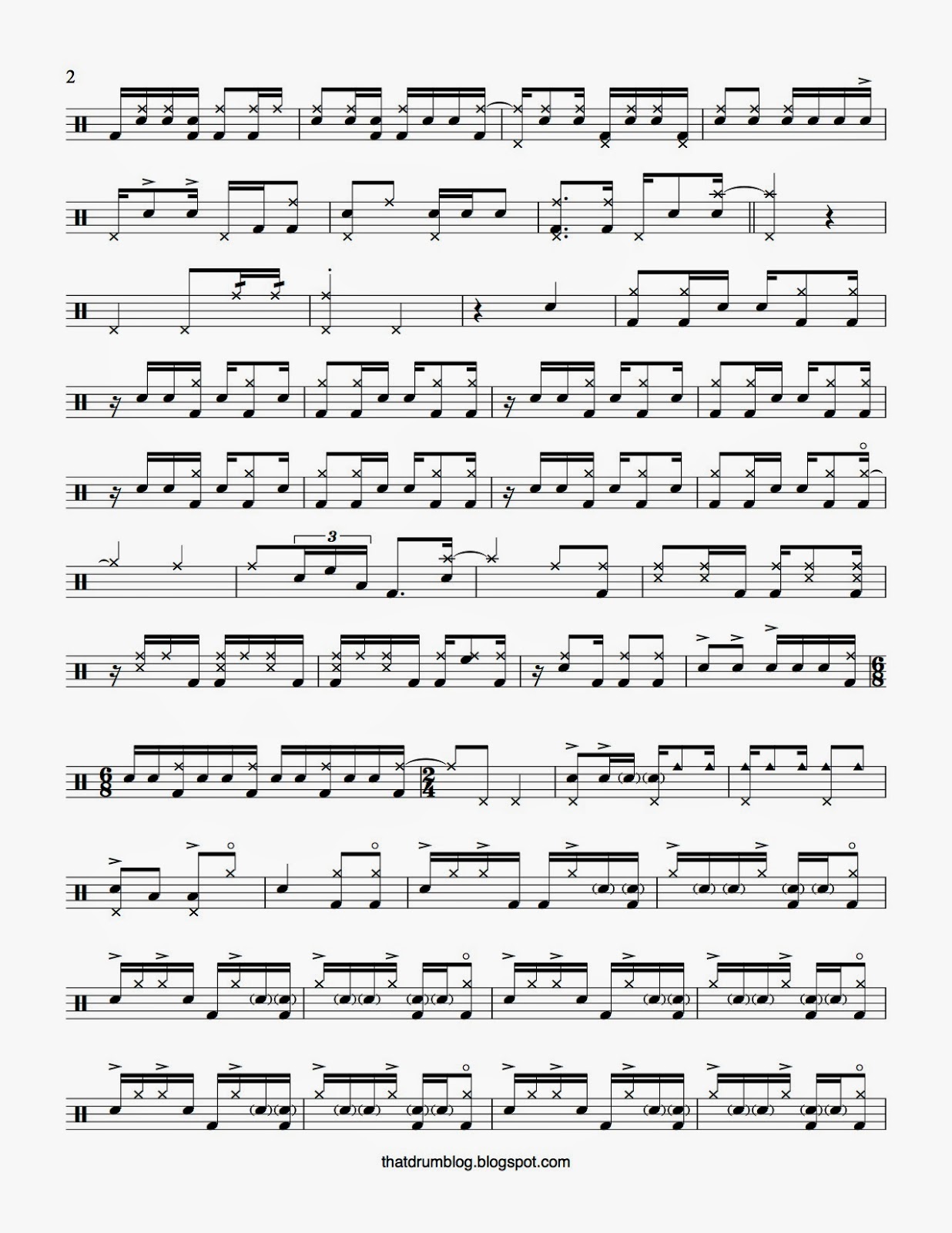 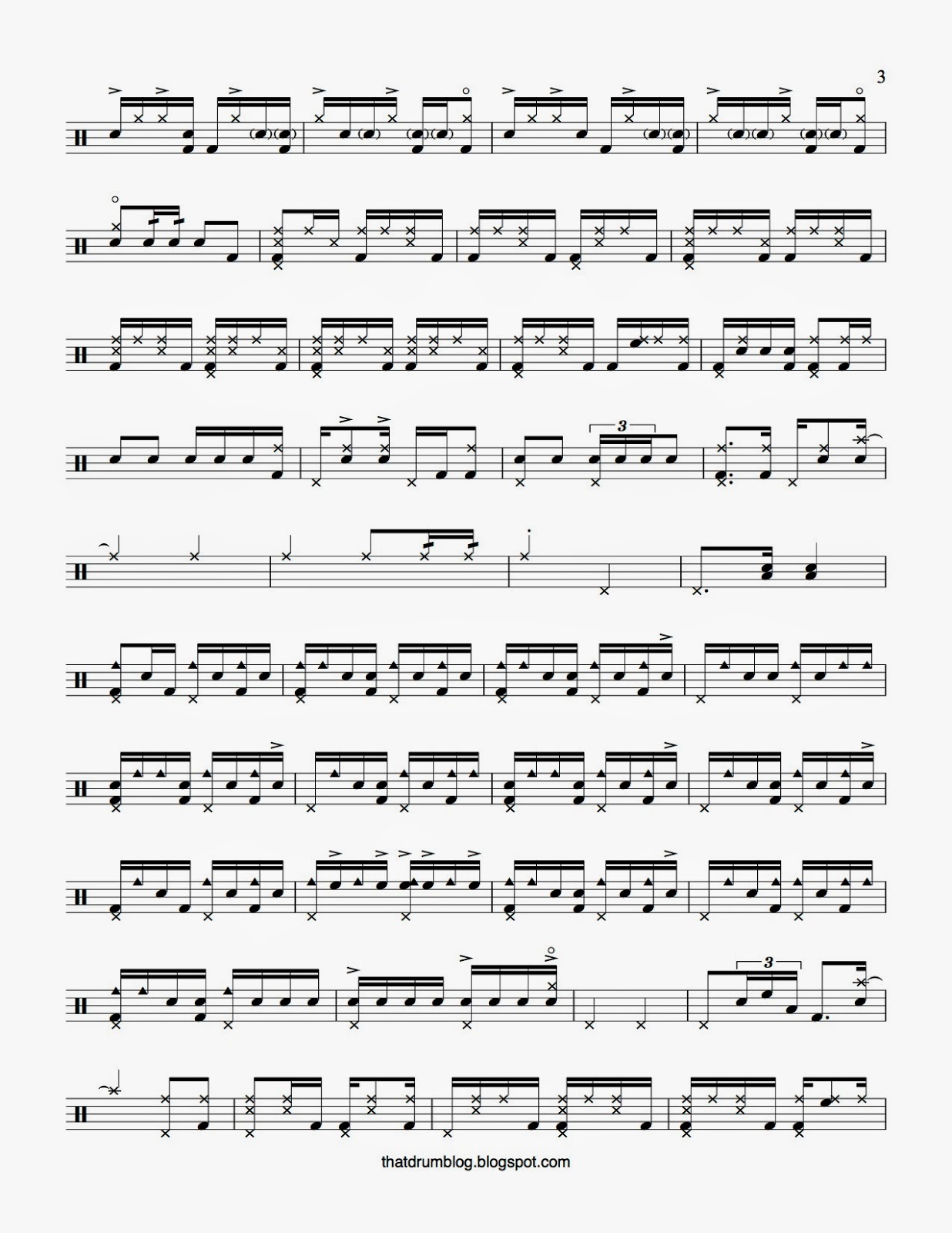 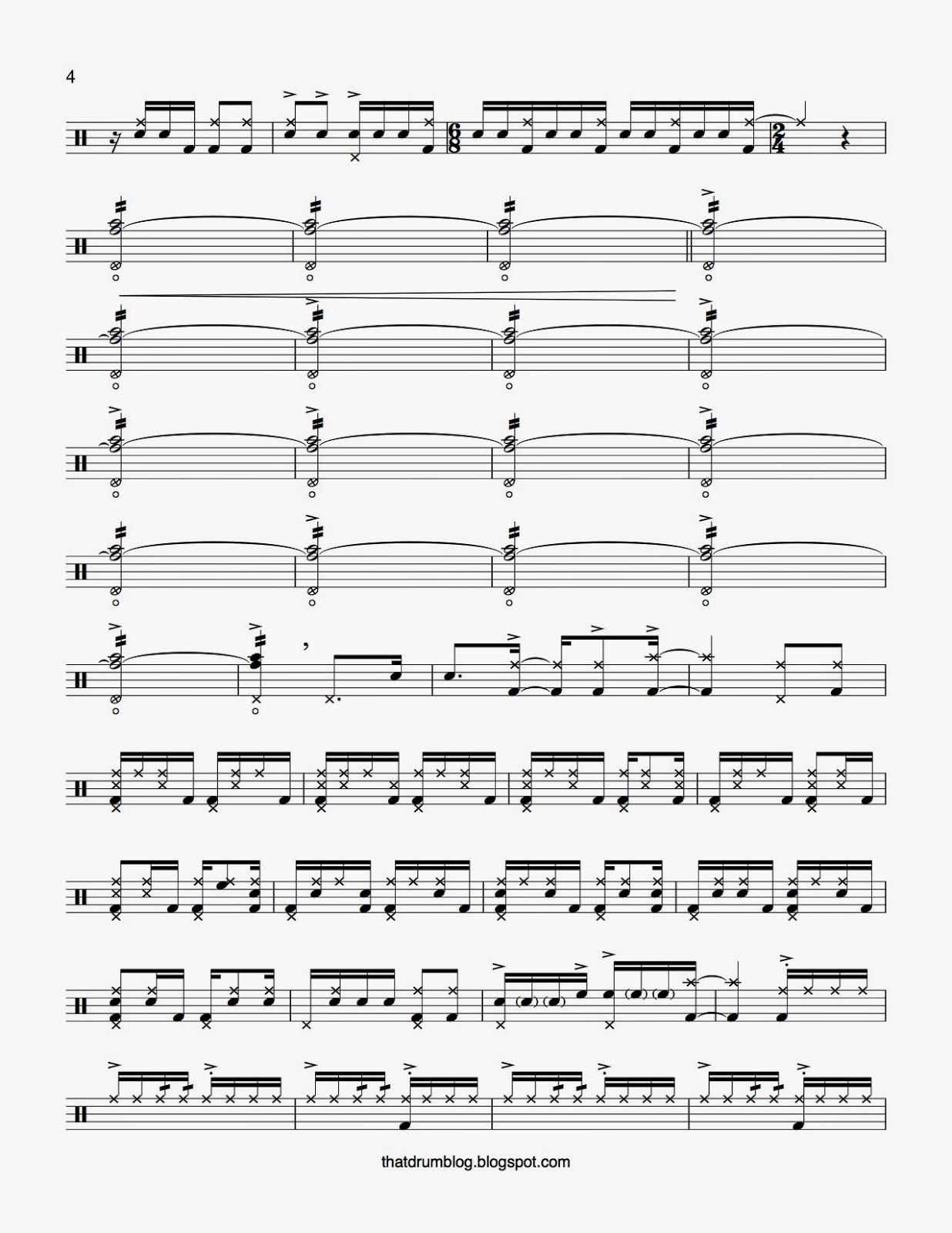 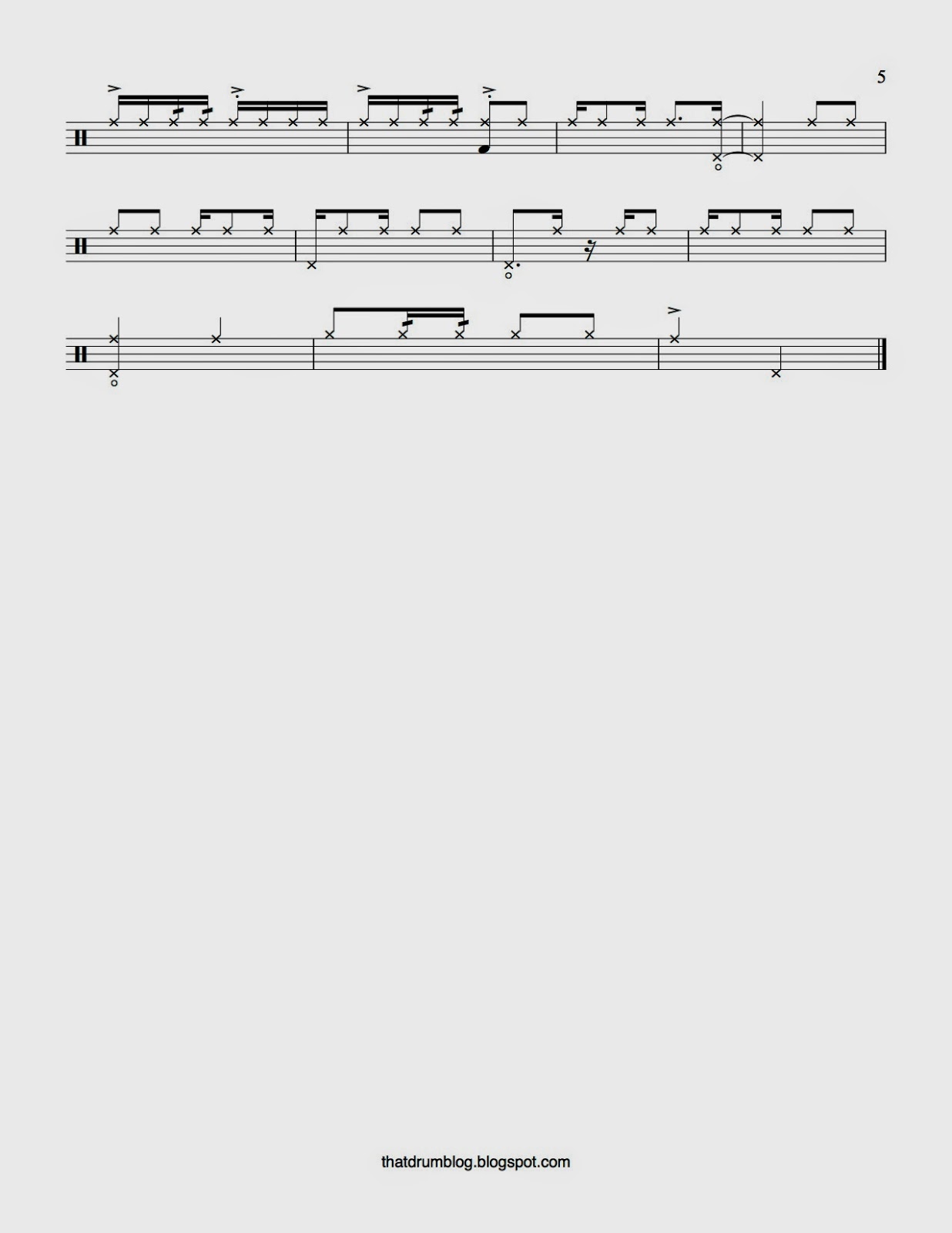 Posted by Adam Osmianski at 3:26 AM