"The Poinciana Beat", as it's most often called, is one of those grooves from the jazz folklore that every drummer should know.

I was first introduced to it as an 18 year-old college freshman who knew essentially nothing about jazz.  I was in a rehearsal with a guitarist named Dan Effland, who is now in Chicago.  Dan was working on a tune and said, "Give me something like the Poinciana beat."  In return Dan received a blank stare.  In typical Dan fashion I received an immense roasting.  So I went back to my dorm room that night and got on Napster (remember Napster?) and downloaded Ahmad Jamal's Live at the Pershing: But Not for Me, which is where Poinciana was first released, and this iconic groove by drummer Vernel Fournier was first heard.


There are quite a few variations throughout the original recording, but the opening groove looks like this:

Vernel executes the groove with a stick in his left hand, and a mallet in his right.  He begins on the hi-hat, and later moves to the ride.  In the book New Orleans and Second Line Drumming by Herlin Riley and Johnny Vidacovich (the former having been Jamal's drummer for a few years in the '80s), Fournier is interviewed about the beat:

I always thought that on "Poinciana," you played the off-beats with the back of your wire brush.
No, that was a stick. The back end of a stick.

And a mallet in your right hand going from the snare to the floor tom with your snares off.
Right. Just like [a bass drummer] in New Orleans. The only thing different was that the bass drummer couldn't make the rim shots.

So how did the beat come about?
I had just joined the band and we were playing the London House in Chicago. We were the house band, so I was playing intermission and I was re-adjusting the drums. And Ahmad started playing "Poinciana," so I just sat down and figured something out, you know, and it evolved. All it is, is New Orleans beats. You've seen the drummer in New Orleans with the bass drum and the cymbal on top, that's all it is. I found that out twenty years later. That's where it came from.


He goes on to say that he was only playing brushes with Jamal at the time, and that for many years "Poinciana" was the only reason he ever had sticks with him.

Let's take a look at a few of the variations that Fournier plays in the original recording.


Throughout the rest of the song you can hear what seems, at first to be a cross stick.  But from the first variation, seen here...

...it becomes clear that playing the cross stick would be quite difficult, if not impossible.  It becomes increasingly unlikely as the variations build.  Upon further listening, debate, and fiddling at my own kit, it's pretty clear that what Fournier is actually playing is a rim shot.  Therefore, all the x's you see should be played as rim shots.

Here are a few more variations with the timings from the recording:

I certainly hope you did your homework with "Accents and Rebounds" for this one:

And don't forget to play the ending properly:

Here are all of the above examples on one sheet so you can print and practice.  Enjoy. 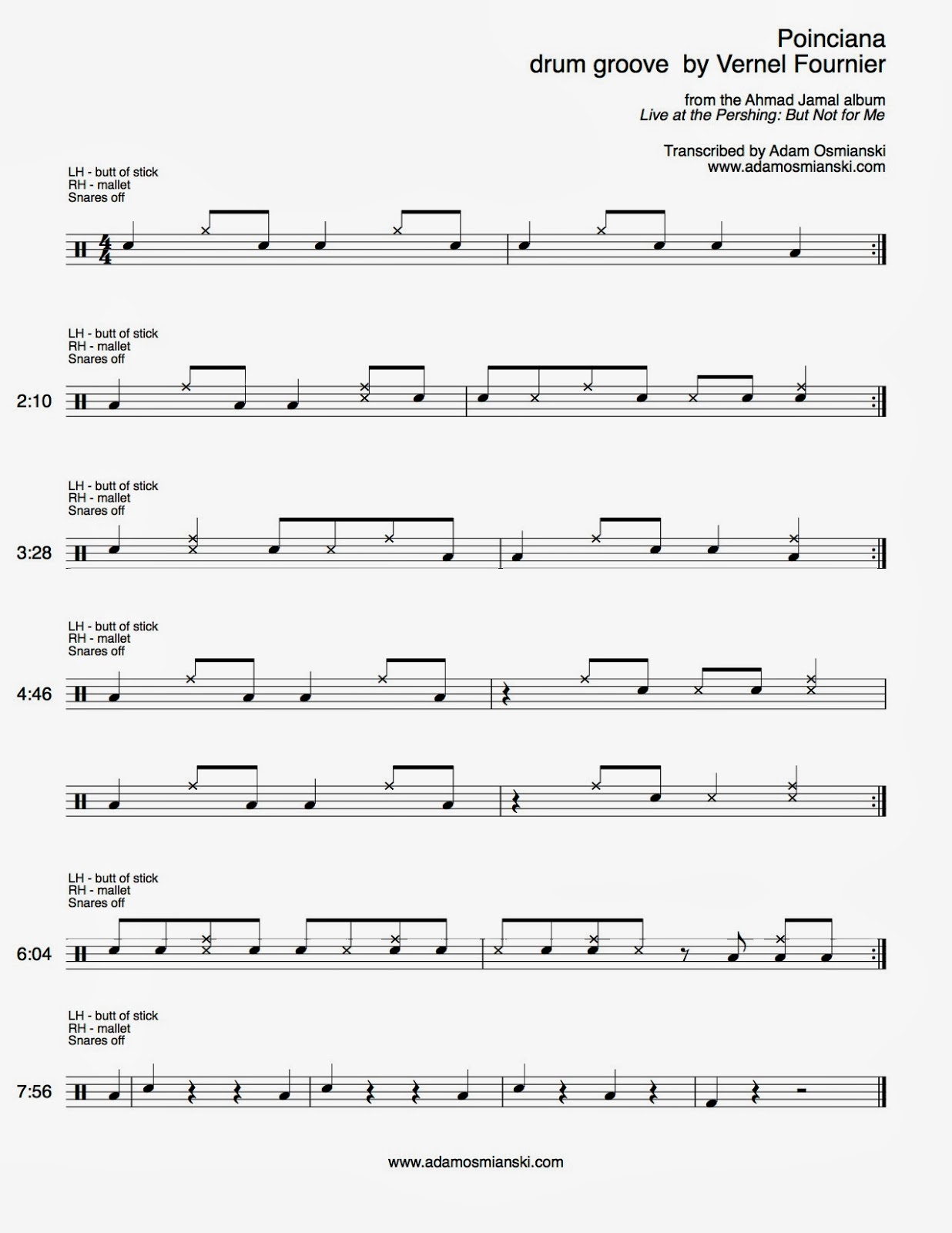 Posted by Adam Osmianski at 6:00 PM