Here's a little snare study that developed out of an improv session on the pad in the back yard yesterday.  I was playing double paradiddles in triplets and moving the accents around while trying to vocalize the pulse, which in itself can be difficult and we will chat about in a future post.  After adding some diddles my OCD took over making me want to organize it into some sort of system and symmetry.  Once I conceptualized it and wrote it down I found that parts of it were deceptively difficult for two main reasons:


1. the change in double stroke speed between the 16th notes and the 8th notes of the double paradiddle can be tricky depending on where the 16th notes fall.

2.  the "strokings" (not stickings; see this post) are not always natural in the various permutations found in the study. 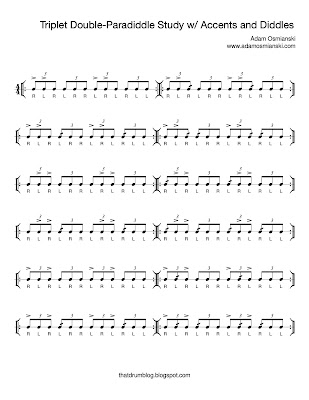 Maybe it goes without saying, but I'd recommend slowing this way down and really working out the proper strokings, ala Accents and Rebounds.
Posted by Adam Osmianski at 4:19 PM