Developing the "ECM Feel" - Part I

The “ECM Feel” first developed in the early 1970s on Manfred Eicher’s ECM label.  The label has a characteristic sound that has become a staple of modern jazz.  While certainly not every ECM release features this drum sound, the “broken”, straight 8th note feel that can be heard on so many of those records in the 70s has become a style as important to know and understand as swing, mambo, and bossa nova; so much so that many charts now say “ECM Feel” in the style marking, and band leaders/composers will often expect their drummer to know how to play it.

For as common as the style has become, there’s surprisingly little material on the subject.  Todd Bishop wrote a cool post about it over at Cruise Ship Drummer!  As Todd points out, the early pioneers of this style, such as Bob Moses, Jack DeJohnette, Jon Christensen, and Airto were likely inspired by pre-ECM greats like Roy Haynes, Paul Motian, and Tony Williams.

Throughout the 80s and 90s drummers like Peter Erskine, Danny Gottlieb, and Joey Baron continued to use and further develop the style and today there are many great drummers who are masters of the ECM Feel, like Michael Miskiewicz, Jarle Vespestad, Magnus Öström, and Jon Fält.

Email ThisBlogThis!Share to TwitterShare to FacebookShare to Pinterest
Labels: ECM

Well, it's that time of year.  I'm grading final papers, setting up final exams, telling students that there is no extra credit and that they'll have to take the grade they earned.  On top of that I'm still under a mountain of paperwork in trying to get my settlement visa for the UK.  I know, excuses, excuses, but that's why the posting has been a little light lately.  I promise I've got some good stuff in the works though that I hope to finish up soon.

In the meantime I'm going to create this new little series called "Dig This" that I can fall back on in times such as these.  So any time you're looking for something new to stumble upon just go over to the list on the right, and click "Dig This".

Today, to start this series, I've found this video of Airto and Flora Purim performing live at the Paul Masson Winery in California.  It looks as though it was part of series called "Harvest Jazz".  A lot of sites on the web date it 1982, but on Flora's own site it's dated 1985, so who knows.  Either way, it's a killer video.  Check it out.

Email ThisBlogThis!Share to TwitterShare to FacebookShare to Pinterest
Labels: Airto, Brasil, Dig This

"Music and the music business are two different things."

I had one of the worst "music business" experiences of my entire career this past weekend.  After a really fun gig with two old friends I had a club owner (who didn't realize that I knew who he was) try to pretend he was a just bartender and that he knew nothing about my needing to be paid.  Of course, this is one of the oldest tricks in the book, so I wasn't too put off at first, until the guy started screaming and cussing me out.  He quickly went from rude, to downright mean, and bordering on scary.  After I finally did get some cash in my hands it was, of course, short, meaning I had to chase him down and receive further abuse.  In the end I secured the right amount of money, quickly made my way to the door, and put a new place on the list of places to never play again.  (That list is incredibly short, by the way)

Initially I was feeling really down about the whole thing.  Luckily I have a radical girlfriend who said to me, "Why are you down?  You handled the situation really well, and you got your money.  You won.  You can handle this music business thing really well."  When I looked at it that way I felt a lot better, because she was right, which then reminded me of that Erykah Badu quote.  Music and the music business really are two completely different things.  And as much as we musicians just want to play music, in this day and age where everyone is doing everything off their own back, we need to learn the music business in addition to all of our practice time.  It's unfortunate that there are people like the club owner I met this past weekend, but there are, and we have to learn how to deal with them, because, unfortunately, there is always going to be another one like him.

The most important thing to keep in mind when these things happen is that it doesn't matter.  Let that person be miserable.  Don't let them bring you down.  You play music, whether as a hobby or profession, which is a skill envied by a lot of people.  And remember…. 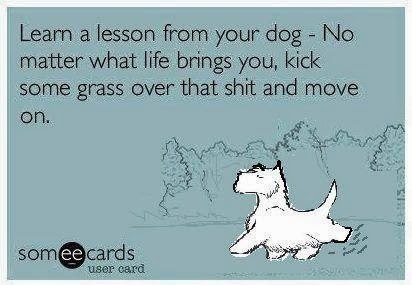 Serving a similar purpose to the Tony William's inspired warm-up that I a posted a few months back is this collection of sticking/footing patterns.  I've found this exercise particularly helpful in creating new soloing ideas, but it can serve a number of purposes from strengthening combinations that you may not realize that you're not quite comfortable with, to developing a more even balance between your limbs, to creating linear grooves. 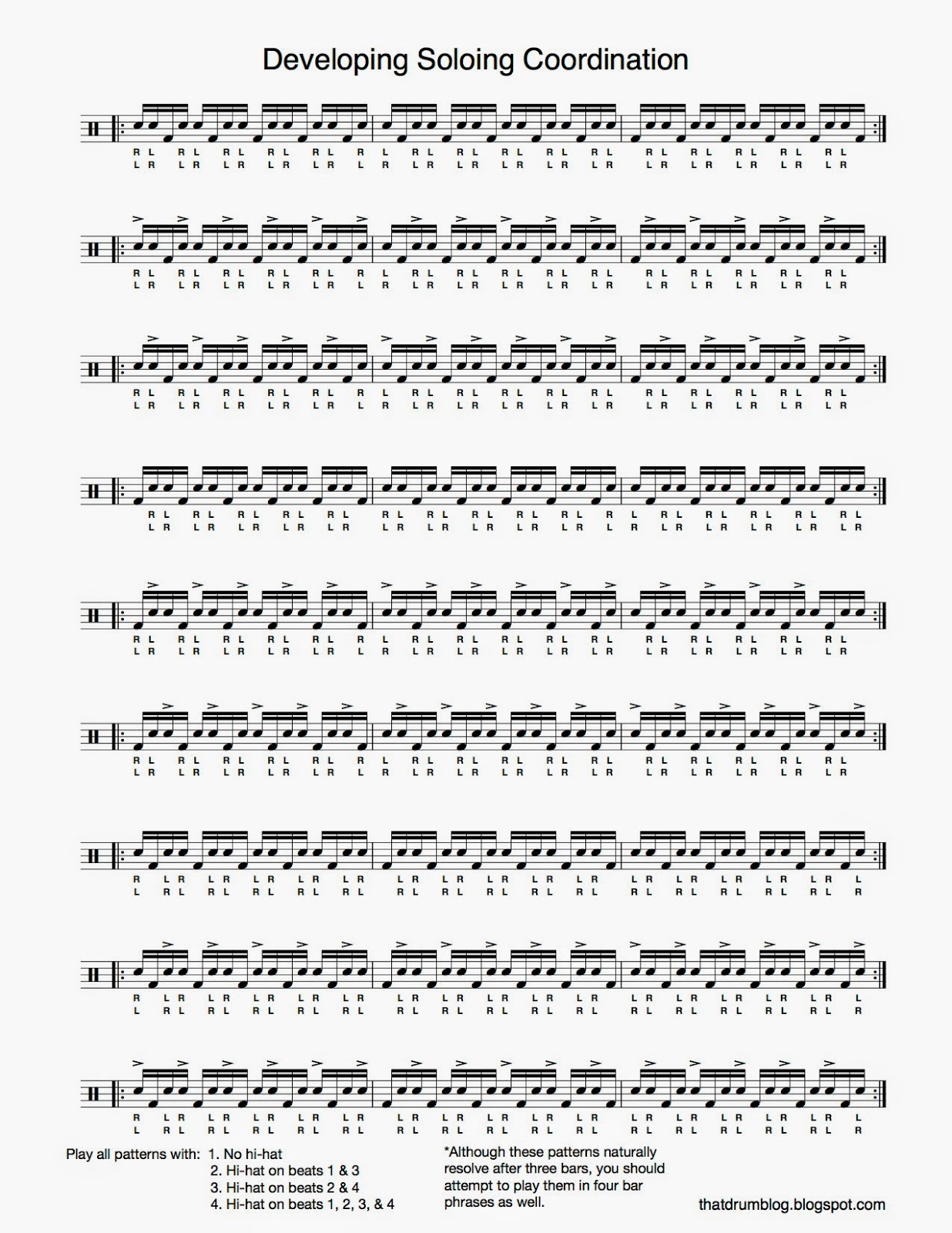 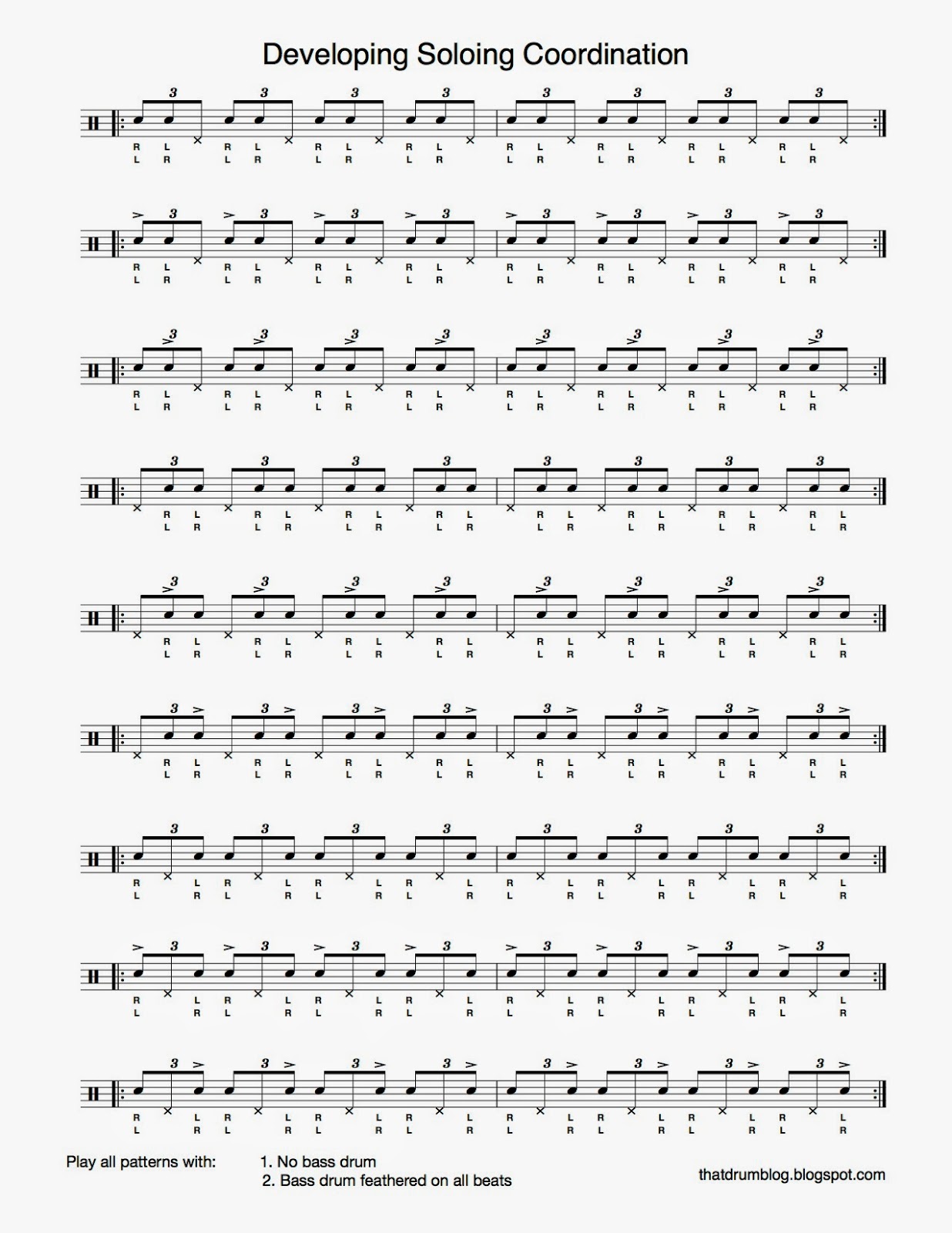 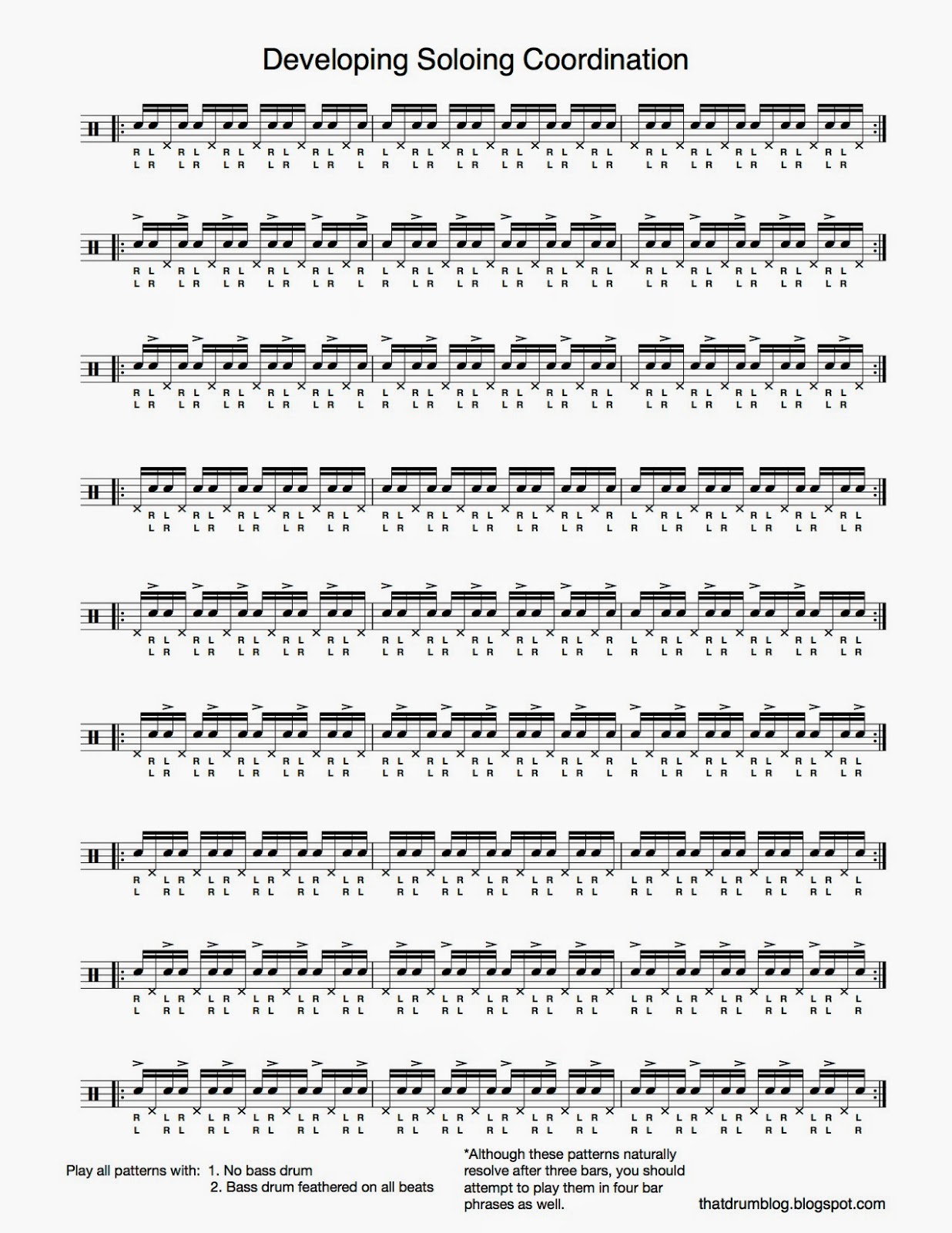 Spend some time with each line on the snare drum until you're comfortable with the pattern.  Then start moving it around the kit.  Loop each line multiple times before moving on.  I try to run each one for 10 minutes straight with absolutely no variation.  It can be very tempting to deviate from the pattern or rhythm and add flams or rolls, but strictly limit yourself to only the one pattern and move it around the kit.  You'll be amazed at the combinations you'll come up that you've never thought of before.

I've also found this exercise quite beneficial to the strength of my ears.  We've all heard that you can only play as fast as you can hear.  I used to struggle with my ears shifting the time by a 16th note or so when soloing at very fast tempos.  Take, for example, the second page.  Occasionally, when playing a pattern similar to this with accents moving around the drums, if a very strong note, say, an accent on the snare drum, fell on the "e" or "a" of a beat, my ears would shift that note to a downbeat.  By working these exercises one line at a time, starting at extremely slow tempos and working my way up I noticed that my ears were getting much faster.  In a sense, I was no longer guessing at what I played, or just letting my limbs fall where they may.  Rather, I began to feel that I knew exactly where my sticks were going and when.  Every note began to have a definite purpose, which, in my mind is the mark of a truly mature drummer.

After you're comfortable with all of these patterns start to mix and match them.  At first stay within the same rhythm, but move from one accent pattern to another.  Then begin mixing the triplet and 16th note patterns.

In a coming post I'll have a Part II with double stroke combinations.
Posted by Adam Osmianski at 4:22 PM 11 comments:

Often times when we as drummers hear the term "Latin" we think one of two things;  Cuba or Brazil.  But let's not forget how broad the term "Latin" is (which is part of the reason I don't like to use it).  It encompasses all of the music from Latin America, which is essentially all of Central and South America.  Think of how many cultures that refers to, including all of the cultures from Europe and Africa that first influenced them.

So, when you want to play "Latin" music, or a band leader calls a "Latin" tune with no specific groove in mind, we should all start looking to other parts of Latin America for inspiration.

Let's start with Peru, specifically the Landó.  Just like jazz, or samba, a great deal of Peruvian music is a mixture of African and European musical elements.  The African elements of the Landó can be traced back to Angola, and the European elements - like much of South America - to Spain.  The African side of the music arrived with slaves initially in Brazil.  Apparently there is a musical culture in Brazil called Londo which is a close cousin to the Landó.

Like many other Latin American rhythms which have it's roots in Africa, the Landó can be felt in 12/8 or 6/4.

Here is a traditional Landó pattern as it would be played on a cajón, which many people often don't realize is native to Peru.

To apply this to the drumset we can simply play the low tones on the bass drum, and the slaps as a rim click.  Another part of the traditional Landó is the palmas, or hand claps.  Try this on either the ride cymbal or the shell of your floor tom.

Next time we'll talk about some other Peruvian grooves, as well as some traditional Peruvian instruments.

Email ThisBlogThis!Share to TwitterShare to FacebookShare to Pinterest
Labels: Peru

Here's a classic Steve Gadd solo from the 1978 Steely Dan album, Aja.  The title track is the only tune Gadd plays on the whole record, though he makes it count.  As a matter of fact, no drummer, besides Bernard Purdie plays more than one track on the album, which also features Ed Greene, Paul Humphrey, Jim Keltner and Rick Marotta.  Really, the whole album is a who's of who of 1970s jazz and session players like Timothy Schmit from the Eagles, Don Grolnick, Joe Sample, Victor Feldman, Larry Carlton, Steve Kahn, and Lee Ritenour among many others.  Aja, the tune, even features Wayne Shorter on sax.

There are a few videos floating around YouTube of Gadd talking about his approach to this tune and breaking down some of the licks.  Not that there's a whole lot to break down.  He  isn't really re-inventing the wheel here (a lot of hand-hand-foot in varying rhythms) but the orchestration is absolutely beautiful and it's executed with a pocket like only Gadd can.  And it's said that he sight read the chart, and nailed it by the second take.

At the end we even get to hear the classic "Gadd samba", which I personally never really consider a "samba", but that doesn't mean it's any less killing.

Also, be sure to check out "The Making of Aja", which can be found on YouTube.  It's a wicked documentary with Donald and Walter talking about the making of the album and interviewing some of the musicians.  They even break out the masters and play some scrapped parts in context, and mute/solo certain tracks.  Very cool stuff. 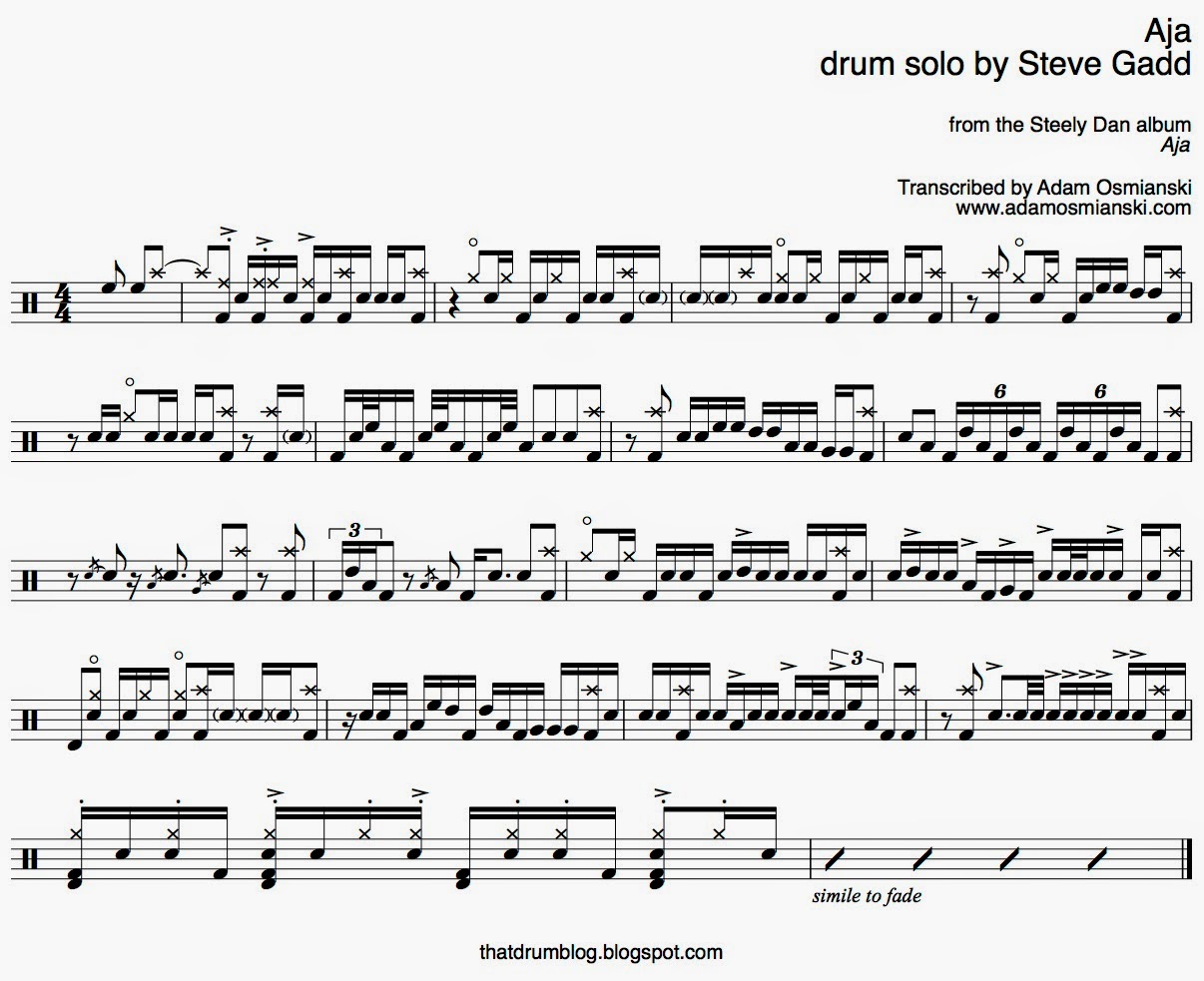