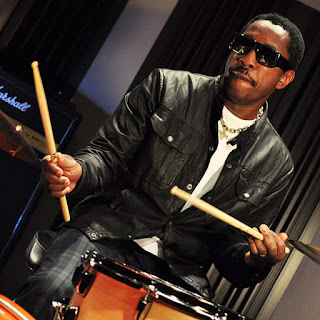 As I mentioned the other day, I recently got to catch up with my old college friend, Mike Dawson.  Being the managing editor at Modern Drummer, Mike is a pretty well connected guy, and therefore has a lot of great stories about different drummers.  Last week he told me a great story about one of our mutually favorite drummers, Steve Jordan.  Mike was interviewing Steve and was hoping for a long, deep answer when he asked, "How do you know if what you're playing is really grooving?"  Mike told me that Steve leaned his head forward, looked over the top of his sunglasses, and said,

"Man, if you have to ask that question, it's not really groovin'"
Posted by Adam Osmianski at 10:00 AM No comments:

Last night I had the pleasure of catching up with an old friend of mine from WVU, Mike Dawson.  You may know Mike from his Instagram page and/or YouTube channel that is chock full of excellent content, or from the podcast he hosts with Mike Johnston called the “Mike and Mike Podcast”.

Mike was in London for the first time, giving a masterclass on creative practice skills.  In it he touched on an idea that some of our teachers at WVU showed us, and something I have mentioned here on the blog before: forcibly limiting yourself in various ways in order to foster creativity.  I always explain to my students that these exercises help develop the control to play exactly what we want to play, when we want to play it, rather than letting parts of ourselves go on autopilot, or work by muscle memory.  Mike described this in three simple words: Freedom Through Discipline.  By disciplining ourselves to only play certain things, or not play certain things, we are developing the control to be completely free with our creativity and improvisation.  Mike employs this idea in his own way, so I’ll leave you to check out his work yourselves, and rather than attempting to give you a recap of last night I’d like to share with you one of my own ways of putting this concept into practice.

Mike does a lot of playing with ambient loops that often don’t imply any specific time or feel.  Rather, it’s up him to see where his creativity takes him with each sound.  So today I gave this idea a try.  I pulled up a random template in Ableton and composed a beat over it.  At the time I just played, and I didn’t write anything down, but for the sake of this post I jotted it out when I was finished.

Since the loop had a decidedly acid house sort of feel I decided to imagine my playing as a drum machine.  The 4-bar groove repeats exactly the same, ad nauseam.  I could “mute” one or more channels, or fade channels in and out; the channels being the voices of the kit.  Therefore, the only rules I imposed on myself were this:
1. When playing the groove, I MUST play the groove, and only the groove, note for note; no extra notes or different voices, and no leaving out notes unintentionally.
2. To improvise I can only change the volume of each voice, or take one or more voices out completely

This sounds a lot easier than it turned out to be.  For one, I thought of the bass drum line as a short AABA form, so it was important to stick only to those two rhythms.  To not add extra notes just because I felt like it, or because I lost my focus was surprisingly difficult for the first couple minutes.  Taking out the snare had its share of difficulties as well.  While it seemed easy enough at first I noticed that my left hand and right foot weren’t alway perfectly aligned.  This was another thing that Mike touched on in the masterclass; use this disciplined practice time to highlight problems in your playing and iron them out.

Lastly I tried full mutes of the entire groove, attempting to stop on a dime in a specific spot in the phrase, and coming back in in a particular spot.  To come back in, say, on the & of beat 2, with full confidence, in perfect time, and without adding or leaving out any notes is much harder than it sounds.

I encourage you to find your own loops, and write your own parts, but if you’d like to start by trying mine, the notation and loop are below.

Posted by Adam Osmianski at 4:00 PM No comments:

If you’ve listened to, or played, much Brazilian music, you’ve certainly come across these rhythms regardless of whether or not you knew their names.  I’ve written about partido alto and Bossa Nova in earlier posts, so today let’s look mainly at telecoteco, which serves the same role, and is essentially a substitute for, or variation of, partido alto.

The telecoteco rhythm shares a similarity with Cuban clave in that it has two “sides”.  The rhythm is two bars of 2/4 long, and can be played starting on either bar.  There is an “up side”, starting on the second 16th note, and a “down side”, which starts on the downbeat.  As in Cuban clave, the melodic line of the song is directly connected to the direction of the telecoteco rhythm, and should not cross it as this creates some pretty unpleasant rhythmic tension.  One place in which telecoteco differs from clave though is that improvisation within the constructs of telecoteco is perfectly acceptable, whereas in clave it absolutely is not, but more on that in the next post.  For now, here are the most common variations of the rhythm:

There are a few different approaches to telecoteco.  In the more traditional styles of samba, such as batucada or pagode, the direction of the telecoteco does not change during the song under any circumstances.  Getting on the wrong side of the rhythm (playing cruzado) will draw the ire of other players around and you can expect a fair amount of eye-rolling and ridicule.  On the other hand in the more jazz influenced styles of samba in the 1960s and 70s where you’re more likely to see drum set and piano it seemed to be more acceptable to freely switch between the up and down side, the telecoteco being more of a vibe than a rule.  I also feel like the more traditional styles of samba tend to play more on the “up” side of the telecoteco, whereas jazz-oriented (and gringo) interpretations tend to start on the “down” side.

In an enredo, or batucada ensemble you’re most likely to hear telecoteco being played on a tamborim.  In terms of moving this to the set, the obvious approach is to play these rhythms on a rim click, or maybe snare drum or tom.  Head back to the Jazz Samba Builder and try some combinations of right hand and foot ostinatos while adding these telecoteco variations in your left hand.

But, don’t forget the concept we talked about back in May based on Kiko Freitas' style of playing, wherein we move the ostinato part to the left hand, and improvise or “comp” with the right hand.  Check out that post here, and try some of the same foot patterns with telecoteco in your right hand.
Posted by Adam Osmianski at 9:57 AM No comments:

Here's a little transcription I did just for the sake of transcribing something on my day off yesterday.

If you nerd out on enough drumming videos on YouTube you may have come across Carter McLean.  Besides playing with Charlie Hunter and the Lion King on Broadway, Carter puts out some great YouTube content.  His videos are very popular amongst his viewers, but he doesn't have nearly as many subscribers as his playing warrants.

Carter's videos are simple and to the point.  There's no superfluous nonsense, such as unneccessary theme music, and titles like "Are YOU making THIS drumming mistake that will RUIN YOUR LIFE?!", or "Do these THREE things to get the gig with Beyoncé."  Most of them are just videos of him playing along to recordings or demoing new gear (of which he seems to find a lot of cool niche stuff).

I stumbled across this video yesterday of Carter trying out some Bovid heads, which appear to be hand constructed animal skins heads, made in the same fashion as hand drum or frame drum heads.  The video is supposed to be about the heads, but Carter plays some really nice stuff.  So, on a lazy Saturday afternoon I figured I'd jot a bit of it down.  I often like to transcribe things like this that have no immediate context to a piece of music.  I feel like it opens up the possibilities for personal application a bit more.

Anyway, here's a few bars of Carter playing, starting around 4:08 in the video below. 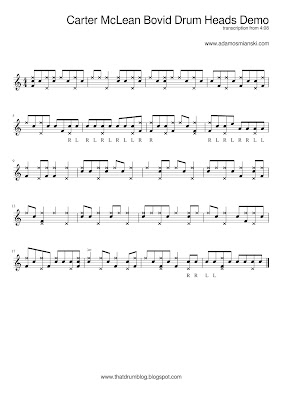 Posted by Adam Osmianski at 10:35 AM No comments: