Time to put those rudiments back to work.  Many of the jazz greats used/use the ratamacue as a fill around the kit, so let's do a bit of it ourselves.

Philly Joe Jones comes to mind in particular when I think of this:

And I've heard Jeff Hamilton turn this around and come up the drums, playing the grace notes on the bass drum, like so:

Philly Joe and Jeff Hamilton generally play both of these in a closed interpretation, meaning they are playing a true ruff which comes just before the primary note, not in any specific time.  But as we've discussed before on the blog, these rudiments can also be played with an open interpretation wherein the grace notes become measured, and are played on the note prior to the primary note.  So this....

Putting this open interpretation on the kit gives us something similar, but with a different vibe to it.

If we take this one step further we may be pushing the boundaries of what a ratamacue truly is, as it's now closer to being a double paradiddle, but we can get a whole series of new ideas nonetheless by playing the grace notes (which sort of cease to be grace notes) on the two 8th notes prior to the primary note as opposed to the two 16th notes before it.  I recently saw Edu Ribeiro playing an idea like this, and brighter tempos it sounds very cool.

And finally, with everything now being evenly spaced it frees us up to move the idea more freely throughout the bar.

Here is everything above neatly organized into one sheet.  Drop me an e-mail if you'd like a PDF. 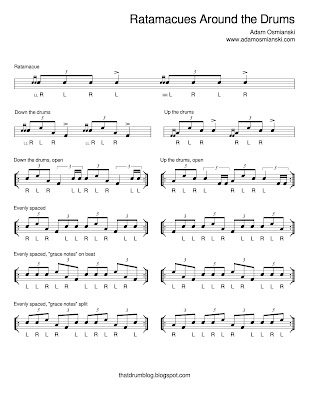 Posted by Adam Osmianski at 6:20 PM